The Long Song by Andrea Levy 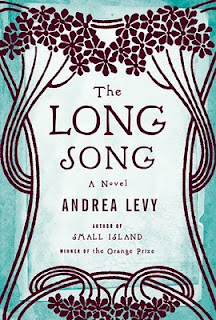 A few years ago I spent an entire year focused on titles relating to slavery and civil rights in the South...from the Civil War to the Civil Rights marches in the 1960's.  It was a painful topic, and revealed bottomless ugliness about the way humans treat each other, especially when in a position of power.  When I decided to read The Long Song, about slavery in Jamaica in the early 1800's, I wasn't sure if the geographical difference would change any of the perspective.  It does.

Levy's novel covers many of the known horrors of slavery:  children stolen from their parents, slaves treated like animals, and incredibly horrific forms of torture for those who dared to look a white man in the eyes.  But she adds other little insights revealing the nature of people who were slaveholders as well as the slaves themselves.  Owners who savagely beat their servants and yet couldn't imagine why the slaves resented them, and who seemed genuinely certain their actions were appropriate.  They expected devout loyalty out of their slaves, yet would punish them for the slightest offenses. The punishment wasn't far off, either, as the owners had their own dungeons and stocks in place for punishment as needed.  And more surprising, some slaves actually felt loyalty to their masters:  in one memorable scene, two female slaves are arguing over whose mistress is more refined.

The voice of the story is that of July, once a stolen child and now a grandmother in England. Her son, raised by Baptist missionaries who took him in when she abandoned him, is pushing her to write her memoirs to save the story of her remarkable life.  She tells the story in a light voice, directly to the reader, and at times seems to minimize some of the uglier parts for the readers sake.  Is it for her sake as well?  Despite her son's insistence, she resists much of the retelling, because of the pain it causes.

"For I know that my reader does not wish to be told tales as ugly as these.  And please believe your storyteller when she declares that she has no wish to pen them.  It is only my son that desires it.  For he believes his mama should suffer every little thing again."

She does as he asks, and recounts the events surrounding his birth, but adds a bit of humor by describing what an ugly baby he was.  They bicker frequently during the writing (he wants more details, she wants less).  Her voice has no pity, and at times her delivery comes across as emotionless, especially as she seems to have no close bond with any of the other slaves.  Yet it's clear that emotionally and physically, that was part of her survival technique.

The story takes place on a sugar cane plantation before and after the 1838 ban on slavery in Jamaica.  It shows how the attitudes of both slaves and owners were slow to change, and how difficult it was to impose a new way of thinking on whites who felt their position as master was their destiny.  Even the whites who were against slavery were focusing on their fine 'works' rather than genuine love.  The woman who raises July's son to a fine young man writes her story for a magazine, and credits herself with his intelligence and morality (apparently he had little to do with it, in her mind). And she can't resist a final mocking insult to July at the end of the article.

The layers to the story are many, and yet the fast pace of the narrator keeps it moving.  She tells her story beautifully, and the interaction with her son, once lost to her, is a story in itself.  Her new life in England isn't simple, and the dramatic differences as she ages almost reintroduces the pain of her past.  She shows confusion when, after all she's suffered, her granddaughters complain about the color of their hair ribbons.
July is a character that will likely become legendary.


Special thanks to Farrar, Straus and Giroux for the Review Copy.
Posted by Amy at 1:48 PM