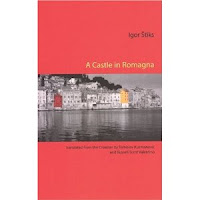 This could easily have been the introductory sentence for Igor Stiks’ A Castle in Romagna, an amazing novel that explores parallel stories from two different time periods. Both stories feature the theme of betrayal, by close companions, from the least expected sources.

It begins in Northern Italy in 1995 where three friends go to visit an ancient castle in Romagna. They are there to visit the castle because of the internment there, centuries before, of the poet Enzo Strecci. Before they can explore the ruins, one of them is delayed by a caretaker, who is fascinated that he comes from Bosnia, at the time a scene of frequent violence. As the other two go to explore, the Bosnian tries to politely escape from the talkative caretaker. But soon, the man reveals that he, too, is from Bosnia, and begins telling his own life story as well as the story of Enzo Strecci.

His story takes place when the schism occurred between General Tito and Josef Stalin. This led to Yugoslavia trying to become autonomous, with the result that eventually it divided into the complicated political region where Bosnia is located. The caretaker recounts how he barely escaped with his life from those convinced he was a Communist informer. He ends up, scarred and mutilated, in Italy. He describes his own connection with the castle while explaining how Strecci ended up at the same location during the Renaissance, and how it ended in Strecci’s execution.

It’s clear that at first the listener feels like he’s missing out on exploring the ruins, but the story revealed soon becomes far more fascinating. The voice of the caretaker is witty and nostalgic, but he’s not wasting anyone’s time. He reveals only the relevant details in both accounts, which makes the novel move very quickly. The style is unusual but the essential meaning has almost a fairy-tale quality to it. While it’s easy to predict what’s going to happen, watching it unfold is thought- provoking because of the corelation of both accounts. The concepts of trust, vengeance, and betrayal are all classic story lines, but explored here in a way to remind the reader that often the danger lies closer to us than we may wish to realize.  The fate of Strecci may be appropriate,  but it’s a poignant moment when all his former friends are called to testify against him to save their master. He realizes then the “logic of power.”

I was fascinated by this book, as it’s the first Croatian translation that I’ve read, and because the author is relatively young. He says a great deal about human nature with very few words, and he points at the blind spots most people have when it comes to reason.  Historically, I never really understood the divide between Tito and Stalin and what it meant for the residents of Yugoslavia.   This book is found at Amazon or at Barnes and Noble's website. It's worth seeking out, as it's a fascinating look at little-known time and place.


Special thanks to Russell Valentino of Autumn Hill Books for the Review Copy.
Autumn Hill Books is a nonprofit press that publishes unique translations,
check out their catalog at http://www.autumnhillbooks.org/.
Posted by Amy at 10:22 PM