The Scandinavian Reading Challenge still has new participants joining...I'm amazed at the enthusiasm for this project.  Ken M. has suggested we discuss some unusual Scandinavian titles that we know of or may have enjoyed.  Some of the authors/titles have been widely discussed or seen in the media (i.e. Larsson).  Ken would like suggestions for more obscure titles in the genre that could be posted for others to find...is there a special 'hidden treasure' you know of that may be hard to find?  Please help! 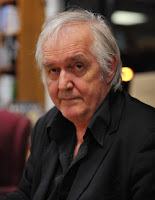 In the news:  Henning Mankell was arrested by Israeli police for participating in the flotilla of boats trying to break through the Gaza blockade to provide food.
http://www.cbc.ca/arts/media/story/2010/06/01/mankell-gaza.html
If you haven't seen the book Purge by Sofi Oksanen, look for it.  The review is coming soon, but I'll just say now that this is easily one of my top five books of all time.  It combines history with crime and incredible character structures and will knock you out.  I'm counting it in the SRC because part of it takes place in Finland (the majority in Estonia).  This brings me to:

Some great reviews for the SRC,

from Bernadette:  The Serbian Dane
http://reactionstoreading.wordpress.com/2010/05/04/review-the-serbian-dane-by-leif-davidsen/

As always, http://www.eurocrime.co.uk/ has an amazing list of titles and completed reviews of Scandinavian Crime fiction. Please send me your blog links or review links to post monthly.

I've now completed the Challenge myself with: Purge, Siamese, The Twin, I Curse the River of Time, Your Presence is Requested at Suvanto, and The Man from Beijing.  I actually read a few more but these have reviews on the sidebar.  Yay!  Still working on finishing the Aussie Author Challenge 2010 now, so my focus is going to be diverted a bit:  lots of Peter Carey to read!

I'm leaning towards an Eastern European Translated Works Challenge, starting in September. Since so many participants in the Scandinavian Challenge are done or close to completion, it might be fun to have a new one going rather than waiting for 2011. Title or author suggestions welcome.

Photo is unrelated, I just like it.  Only a cat would get a tattoo of itself.

The giveaway for Dixon's The Language of Secrets ends at 9:00 pm Pacific time tomorrow (June 2nd).  US street addresses only (sorry!).  The next giveaway will be international!  SRC participants are automatically entered, others can enter by leaving a comment with email address.

On a personal note, I finally saw the film The Road.  The region I live in didn't have a showing so I had to wait for the DVD release.  My son who read the book with me refused to watch, as he feels no movie can compare to the book.  Usually I agree but I was really impressed with this film.  Much of the gore is gone and what remains is the father-son relationship that is tender and tough.  I highly recommend it, and it is not nearly as gory or violent as the movie trailers made it out to be.  It was strangely uplifting, not nearly as depressing and bleak as the book.  Not excessively so, anyway. The trailers appeared to focus solely on the first half hour or so, with additional scenes that weren't even in the final film.
Posted by Amy at 12:11 PM