Edited by Natalia Smirnova and Julia Goumen
Note: this is not published by the Moscow Chamber of Commerce or Tourist Board.  This is not an exploration of Russian history or a guide to the city.  It is noir.  I state this because while it may be obvious to others, I kept catching myself thinking "this is so stereotypical of Russia...surely not everyone is this bad!"  Oh, back to "noir".  I needed to remind myself of that definition throughout: "crime fiction featuring hard-boiled cynical characters and bleak sleazy settings."  Once I was clear on that, it was easy to understand. 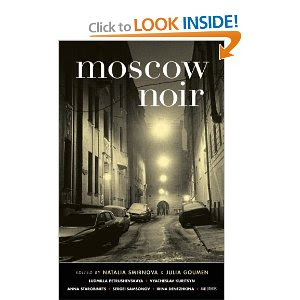 This collection of short stories is random and the stories themselves are incredibly varied.  However, a few things link most of them:  distrust, despair, revenge, and rage.  Physical similarities as well:  snow, night, black sedans, drugs, alcohol, and leather jackets.
To say life is cheap in this style is redundant.  The Soviet history created characters that are immune to feeling and social conventions.  And if, without intending to, a character does show their softer side? It's guaranteed they aren't going to live long after.  Death is everywhere, as are traitors.  Many characters are cops. No one can be trusted because every underling knows their way to success means eliminating their superiors.  Strangely, money is often in excess, yet having it doesn't buy anyone a way out of the mess.

Many of the stories take place at night, often in the snow.  Train stations, deserted streets and subway tunnels are frequent settings, and most of the characters use drugs or alcohol to numb their emotions.  The anger that should be directed at the failed institutions that created them is instead directed at their fellow man.  The descriptions of the cold weather, the complicated facades of the empty churches standing guard, and the hard scrabble lifestyles are all detailed without slowing down the pace.  The stories move along briskly.

The book is grouped into sections:  Crime & Punishment, Dead Souls, Fathers & Sons, and War & Peace.  I think my favorite was "Field of a Thousand Corpses" which illuminated the corruptness of the police and their inability to effectively handle the crimes they investigate in any sort of honest way.  Yet there was a sort of tenderness in how one detective tries to train another and advise him on how to fit in.

A word about Akashic Books...they have a series of Noir titles, including Los Angeles, London, etc.  All have a similar vein but illuminate a region in its own unique way.  Their Los Angeles Noir was especially interesting for me, trying to guess the locations that are mentioned since I've been there often.


Special thanks to Johanna Ingalls of Akashic for the Advance Review Copy.
Posted by Amy at 11:16 AM