This review for Sofi Oksanen’s book Purge is probably the most difficult I’ve ever done. I liked the book very much, but I’m terribly afraid of revealing spoilers, as the novel is so complicated and layered. I can easily describe it as one of my personal favorites, up there with Per Petterson and Tim Winton. 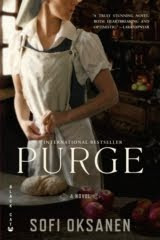 To begin, this book has nothing to do with eating disorders, and the only real complaint I have is that the cover art scarcely seems to apply to the complicated work within. After you’ve read it, you realize that the cover does in fact refer to details encountered, but I’m curious if the cover itself would dissuade readers from picking it up. A pretty measly complaint, to be followed by lavish praise!  However, I’m also known to pick out wine based on how artistic the bottle labels look, rather than whether it is any good or not, so maybe that's just me!

That said, there are two interlinking threads in this story. One character thinks she’s escaping her small Russian village, allured by the glamorous Western world represented to her by elegant silk stockings worn by a visiting friend. Unfortunately, while Zara focuses on the material luxury represented by those stockings, she doesn’t see the wave her friend gives her, “it looked more like she was scraping at the air with red fingernails. Her fingers were slightly curled, as if she were ready to scratch.” Desirous of that ‘better life’, frustrated with her silent mother and her fragile grandmother, Zara thinks she can escape. Instead she’s kidnapped and chained, set up by that friend, and headed for a brutal world in Germany: a place that makes Vladivostok look much more beautiful.

In the meantime, Aliide leads a quiet life in Estonia, her days spent canning and cultivating her small garden and dairy animals, dwelling in the past. Since childhoood, her life was filled with pain, suffering, and loss.  Her village had suffered from Fascist and Communist occupation, with many citizens (including her own sister and niece) being sent to Siberia. The village itself was a complex array of loyalties…those that hoped for American intervention to save them, others loyal to Russia, and still others harboring German sympathies. Not even the simplest of farmers could trust one another: too much was at stake. The atrocities from all sides were fresh in everyone’s memories. The result was people who carried physical and mental scars, who were eaten up with regret and suspicion. Aliide was one of them, more damaged than most.

Eventually Zara makes an escape, and her path crosses with Aliide. Their new relationship is mistrustful and edgy, as neither knows the true identity or agenda of the other. As this developed, I was sure that “this” relationship was the core of the novel. I was wrong, and the way the story proceeds is not only unpredictable but shocking and ugly. No one is as they appear, and trust is unachievable. Because it turns out that Aliide knows far more about Zara than either realized, and the threads that connect them go back further than their chance meeting. Here unfolds the deeper part of the novel, the most disturbing, as we see that Aliide is not the warm-hearted savior we expected her to be, and her damaged psyche is revealed.

The underlying theme is that appearances can be deceptive. A person can appear good, or moral, or upstanding. But what they hide can be unimaginable, and they keep the deception up so well that they can convince themselves it doesn’t exist. Danger is present everywhere, but it can distract you with a beautiful appearance. This is well expressed in an introductory quote from Paul-Eerik Rummo: “The walls have ears, and the ears have beautiful earrings.” Such a simple quote, but it describes much of what the novel means.

This is a combination of crime fiction and historical fiction, and fans of both would be pleased. It was translated from the Finnish by Lola Rogers.


Special thanks to Martin Wilson from Grove/Atlantic for the Review Copy.
Posted by Amy at 10:49 PM