It's going to be difficult to avoid sounding over-enthusiastic for this novel.  Because seriously, it's very good.  I haven't read this tight of a police procedural in awhile...years actually.  Several factors make it stand out-hopefully I can articulate these enough to explain why this is a great book.  So what's it about? A group of experienced detectives work with the Internal Affairs department to stop a crime spree organized by several lower-ranking officers. These have created a gang that stockpiles weapons and stolen goods and seems unhesitant to use violence against innocent civilians. Los Angeles is a complicated setting for such an investigation, as the freeway traffic and distance between key 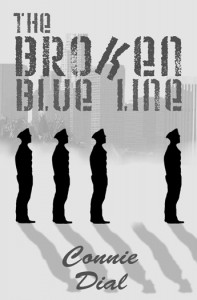 locations serves to protect the gang and allow them an easy way to disappear into the city.

The Broken Blue Line has a complex plot with plenty of twists, yet the characters are built well enough to make it interesting.  Many novels, especially a crime novel, sacrifice plot for character buildup or vice versa.  This had an interesting balance of 'regular' policemen solving a crime: no hot shot renegade appears to solve the multi-faceted drama, but rather ordinary and somewhat average guys work together.  Of course, there's the usual friction between top level brass and the detectives in the street, but the author doesn't let that sidetrack the plot.  Best of all, even towards the end, when I usually can guess what will happen, I was totally surprised.  This is because the author, Connie Dial, doesn't go overboard in foreshadowing events, so the tension is propelled forward in a concise, riveting pace that doesn't give anything away.

Another factor is that while the story takes place in Los Angeles, there is no celebrity angle, nor reference to the cliche LA stories that appear in movies or books (no Russian mafia, no Japanese Yakuza, or Chinese triad).  The story is far more realistic and believable, most likely because the author is a former LAPD commanding officer with 27 years on the job.  The level of detail and protocol is precise, and I appreciated more about the details of the officers level of dedication.

I think I especially liked it because, unlike many female authors who write crime, she doesn't make the story all about one fashionably dressed female character who butts heads with her ignorant male coworkers.  In fact, for the most part, the main characters are all male.  Three women, significant to the plot appear, but none are typical.  The Patricia Cornwell books annoyed me, years ago, because it was always her main female character in conflict with her male colleagues in every single book.  The Sue Grafton novels feature some interesting plots, but the wise-guy female character seems to depend more on wit and cutesy tricks than actual detective work.  Then there are the ones who depend on layering their narrative with name-brands and emotional baggage that they feel are essential to make a believable female character.  Lastly, there are some who are incredibly vulgar and/or gory, creating a book more known for being explicit than for a great plot.  This story takes the male/female conflict out of the picture and makes it a complete non-issue.

It's a fast-paced read, with a satisfying conclusion.  There were a few elements that distracted me: one minor and probably petty observation was that most of the characters have names of six letters and are very bland sort of names.  I kept getting Connor and Cullen mixed up, and other similarities in the names of characters was a minor annoyance.  At one point, there seemed to be a minor plot discrepancy that stopped me in my tracks going, huh?  Lastly, the lead detective, Mike Turner, while wise on the job is especially knuckleheaded in his relationship with his ex-girlfriend who plays mind games endlessly.  But in all, I enjoyed the little bit of escape it provided, and not having to dive into a bunch of gore was refreshing.  It'd be a great movie!


Special thanks to the Permanent Press for the Advance Review Bound Galley.
Posted by Amy at 2:06 PM