How to Eat a Small Country, Amy Finley

A Family's Pursuit of Happiness, One Meal at a Time 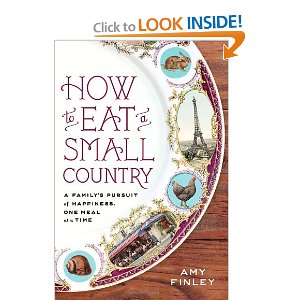 Being an obvious “foodie” along with my family, I thought this book about a couple’s journey, eating their way through France, looked pretty good. The author writes in a conversational, enjoyable way, and she’s up on her history-noting the significance of many of the sites she visits, both historically and culturally.


But…the book begins with a seriously disturbing “execution” of a rabbit for supper. I’m sure it’s supposed to introduce us to the dark humor and make the story feel authentic, but it is really disturbing. The idea of the couple’s children rolling on the ground laughing and pretending to be the dying rabbit is not really appealing. It’s a strange place for the book to jump off from, but it does get better. It proceeds into the story of the woman and her husband, who make the trip to France to restore their marriage after a rough patch. She had won a contest on Food Network and even got her own show, but he was uncomfortable with her being on television and away from home. No, he’s not a Neanderthal, but there is definitely some passive-aggressive stuff going on in their marriage that I’m not sure France will sort out.

Essentially, she signed on for the contest because she was unhappy as a stay-at-home mom, but he was unsupportive when it meant her being in New York while the family was in San Diego. She acknowledges to her son that she wasn’t happy in NY either, and that’s why she gave up the show. That’s fine…it’s not my business anyway, and if that makes them happy, great. But then she goes into her husband being uncomfortable with her “fame” and how deeply wounded she felt by all the bloggers and media talking about her and commenting on her appearance. I had to stop and look at the cover again: I had never heard about her. I’m guessing that’s possibly because I don’t watch Food Network, but it could be that there are just more important issues in the world. The idea that her concept of fame endangered their marriage seems a bit silly-she’s not Posh Spice or Beyonce.

She is a very good writer, and she makes many of the cities they visit sound wonderful. But two other things are annoying: one is that while they profess being on a budget, their entire trip is centered on locating what she admits are expensive delicacies and wines. You can’t play broke and spend $120 Euros on lunch…all while staying in various locations in France. It’s not a cheap trip, you know? So in some paragraphs she whines about finances and it’s hard to summon the sympathy. I really do like her style-she’s very open and funny. She’s quick to make jokes at her own expense, and she’s clearly a devoted mom. But since she makes her marriage a main basis of the story, I feel like some comment needs to be made on their relationship. Both of them are scorekeepers, and while they may iron things out for awhile, such doesn’t bode well for long term. Until they both stop keeping track of who did what, they’re going to need many more trips to France.

Secondly, unless she assumes her English readers are incredibly knowledgeable about French cooking, she might have explained things better. What is choucroute? Boudin noir? Unfortunately, given my public school education, the most exotic food dish I speak of is Zuppa Toscana from Olive Garden. (Actually no, but you get my point). Then there’s the idea of her lovely family sitting down at a restaurant for baby calf’s head. Seriously? Does she read to these kids? How do you get past the cow’s head with kids that have just read Click Clack Moo?


Thanks to Amazon Vine for the Advance Review Copy.
Posted by Amy at 6:53 PM