Unless it Moves the Human Heart by Roger Rosenblatt

The Craft and Art of Writing
Roger Rosenblatt is a huge name in the world of writing.  He's written magazine columns, plays, essays, and books and is a master of language.  I've always enjoyed his articles in Time-he's a favorite of mine.  In this book he describes a semester of teaching several students to write, by having them experiment with different forms of fiction and poetry.  In an interview for his book, he describes the concepts he wanted to bring to the classroom to inspire his students:

"In one instance, I closed the door and the sound of the closing door would be another sensory stimulus. Once I did it, then I saw that they launched into their work with an entirely different vocabulary and an entirely different zest and a feeling of themselves. Then I began to think, there are other things one can really do to teach one to write in a more sophisticated way. And I started to pay attention to such things. I started paying attention to [things like] the power of the noun, to using anticipation over surprise, imagination over invention, things like this that are not exactly nuts and bolts of writing but they are related and they work in the service of a larger goal."
------------CSMonitor 2/6/2011 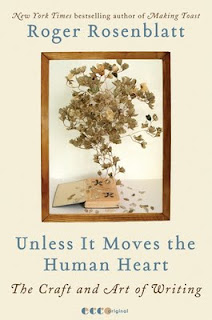 Being excited to read these slim guidebook, I was hoping to find ways to improve my own writing with useful advice.  I've already learned that I need to be more succinct and edit more carefully.  I appreciate what his purpose is, to help writers find humanity in their writing and go beyond the easiest cliches and visual images.  I'm sure the actual students that he taught enjoyed the class (I know I would have loved taking it), but reading about it second-hand, almost as if eavesdropping on the class, is incredibly disappointing.

I'm not sure if it's because the dialogue (which must have been recorded for him to have so much detail?) sounds stilted or because the students sound artificial, but it just doesn't feel real.  Many times he'll ask a question of the class as a way to open a conversation, but often his advice came off as contrary to what he just stated.  It's almost as if it would have been simpler to say "there are no hard and fast rules to writing", because that's the message the book gives.  While the involved conversations and arguments in the classroom show intelligent students with a challenging teacher, hearing his interpretation of them and their work is annoying.

I'm not sure who would most enjoy the book.  Perhaps for someone looking for motivation to write more experimentally, it would be useful.  But for those of us still working on the basics, it wasn't that helpful.  I know, I know....I'm setting myself up by saying that about such an esteemed writer.  It pretty much guarantees that this post will be full of typos and bad grammar. In any case, for a better experience, his book Making Toast is far more enjoyable and insightful.


Special thanks to Ecco for the Advanced Review Copy.
Posted by Amy at 12:05 AM