Before the Troubadour Exits by Jeffrey C. Alfier 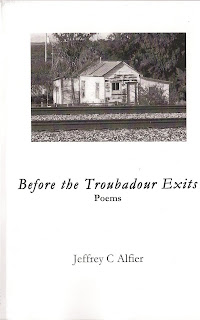 In Jeffrey Alfier’s latest collection, "Before the Troubadour Exits", hawks survey a desolate landscape where solitary people play hide and seek with their own identity. The unforgiving desert, with its cloak of dust and haze, alternates between camouflaging and revealing the quiet souls who drive its empty roads. Using the sparest of prose, with close attention to the concrete visual elements, Alfier creates a vision that is stark and punishing while remaining moody and somehow dreamlike. While the drinks served to the locals may be watered down, the poems remain concentrated and tight.

In “No One Like You”, he frames the snapshot of a early traveler as he makes his journey, or possibly, his escape:

…Puddles he’ll step in
Will blur reflections of passerby,
Like rain-smeared addresses on
Unforwarded mail….

“To a Friend Gone Fugitive” is an appeal to return, a plea to close the distance that can appear because of loss, misunderstanding, or fear:

Listen: I know your gig has long decamped;
You’re on the bum, or lam, bad hours afoot-
Like both jokers shuffled into your deck.
Return to friends. No one breaks your heart here.
Welcomes may be shaky but seldom worse.

My favorite is “Fidelity”:

A man married four decades
To the same woman has broken
All biblical records for forgiveness –
Even makes Jesus yank his hair out….


Coming and going, he meets
His own wanted posters, each one
Aged 6 months beyond what he spies
In any mirror. You see, a man
Beholden that long always takes
The long roads home, but jaywalks
Fast when the ambient voices
Say jack him up, lock him down,
Frisk him hard for loneliness.

Phrases appear that are unforgettable because of their composition:

“…knowing the last man to quit that woman/became a chalk silhouette in a Winslow alley.”
“Coyotes thrive by abandoned campfires.”
“Patrons drink their alibis credible.”


The poems are stories that hint of soft hearts hidden behind layers of scar tissue-tough guys that still want to play make-believe, if only till the bar closes.  There's not many words depicting emotion, yet the absence itself implies a strong sense of feeling, bottled up perhaps, like in the bottles that line the bar.


Special thanks to Kindred Spirits Press for the Review Copy.
It can be purchased at www.sprreview.com.
Posted by Amy at 12:12 PM