Between Nine and Nine by Leo Perutz

Translated by Thomas B. Ahrens and Edward T. Larkin
"He belongs to a lower form of the human species.  An occasional game of poker is the only intellectual activity I have observed in him, and even then he loses most of the time.  You don't know him, but I always had the notion-even before I had met him and long before I knew who he was: 'This mandrill actually walks more or less like a human'.  It wasn't out of spitefulness...but I was really surprised that he was so good at walking upright....Well, this mandrill is about to snatch Sonja from me." 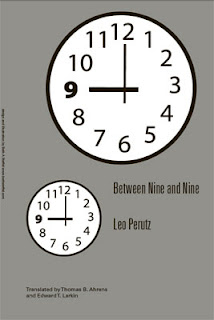 Poor Stanislaus.  To hear him describe Georg Weiner, you'd think that Georg was the creepiest guy in the world.  Why on earth would Sonja fall in love with such a cad?  Actually, the problem is the socially-inept Stanislaus.  Arrogant yet completely ill at ease.  His cagey behavior makes some assume he's a thief, yet he pays his way.  Some think he's an incredibly smart intellectual, but his actions are childish.  All of this combine to create a narrative that is both cynical and sweet.

One thing is sure:  Stanislaus loves Sonja, to the best he can, given that 'love' is undefined for him.  Sonja for her part is scared to death of this suitor, who turns charm on and off, and leaves everyone a bit off kilter.

"I often told her, a woman shouldn't go to a cafe.  To see a woman, you should have to climb four flights of stairs and ring the doorball, your heart pounding.  And then you don't find her at home - you've come in vain.  It's not until you're going down the stairs, disappointed, that you feel that you love her.  But a woman whom you can find at a cafe whenever you feel like seeing her...declines in value and becomes commonplace."

Against Sonja's opposition and against his own awkwardness, Stanislaus has to find the money to take Sonja on a trip to compete with the wealthier Georg.  His attempts are whole-hearted, as he sees no problem with stealing or evading the police.  In fact, it's only in those frantic moments, jumping over roofs, that Stanislaus comes even close to his image of himself.

This complicated novel features other intriguing characters (Steffi and Sonja being two) that never play to type.  I did get confused a few times as to what was happening in the narrative: was it actual or imaginary?  Yet I'd quickly find my place in the context after a few sentences.  Written in 1918 in German, the story is timeless as a good underdog story never ages.  An excellent title for the Eastern European Reading Challenge!!!  It's part of the 'Studies in Austrian Literature, Culture, and Thought Translation Series' from Ariadne Press.


Special thanks to Jorun with Ariadne Press for the Review Copy.
Posted by Amy at 12:05 AM