Thanks to Colleen Connolly-Ahern, Professor of Advertising and Public Relations at Penn State University, for contributing this review to the blog.  It sounds like a great read for those doing the Eastern European Reading Challenge!  She has her own blog at http://www.colreads.blogspot.com/ where you can discover great titles too...

The Possessed: Adventures with Russian Books and the People Who Read Them 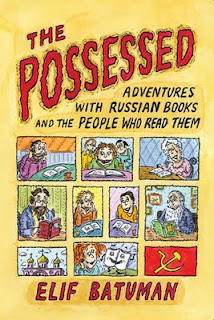 Perhaps it’s no surprise that someone described as a “perpetual student” would fall in love with a non-fiction title about the arcane nature of life in academe, particularly the study of Russian literature. Elif Batuman’s The Possessed captures academic life, warts and all: the joy of exploration, the despair of missed chances, the almost selfish pursuit of the unique, the camaraderie of shared misery (anyone who’s ever been to graduate school will immediately recognize that aspect of the book). In the process, Batuman turns her own life into a piece of Russian-like literature, analyzing her every move for clues to who she was, and who she has become.

Batuman’s story is fascinating. She grew up in the U.S., fluent in her mother’s native Turkish. She developed a love of literature as a child and focused on Russian as an undergraduate. But one of the great twists of the book comes in an unexpected grant opportunity in Samarkand, allowing Batuman to add Uzbek to her impressive list of language credentials. Along the way, she realizes that a language is more than a collection of consonants and vowels – it is inextricably linked to culture, society and the varying expectations of day-to-day life where the language is lived.

...as Foucault has observed, the institution of authorship is largely dependent on the author’s liability to state punishment. It’s true that Russia subjected its writers to an unusual degree of state control; consequently, it’s also true that nowhere in the world has literature been taken more seriously (210).
The cartoonish cover art might lead a reader to believe the book is a comedy, but that would be a mistake. To be sure there are some very amusing vignettes, as when Elif is working on an exhibit and conference dedicated to the works of Isaak Babel, only to find herself in the middle of a dispute between two competing Babel heirs, each of whom favor different interpretations of his work. And there is a certain kind of dark humor in Batuman’s interactions with the Byzantine bureaucracies of Uzbekistan. But like Russian literature, the humorous bits are all predicated on an analysis of the vagaries of human existence.

I thoroughly enjoyed this book, although I have to admit that as someone who is not a literature scholar, some of the discussions of post-modernist schools of literary interpretation were a bit much for me. There was one section on Derrida in particular that had me shaking my head and wondering, “Do people really fight about this stuff?” But that’s just the point: they do. And I probably would have gotten even more out of the book if I was better schooled in the great Russian authors – but that’s my shortcoming, not Batuman’s, and one this book has inspired me to rectify. But I would heartily recommend the book to lovers of literature and anyone who has every slogged through graduate school in general. Both groups will find something to love here.

Thanks Colleen!
Posted by Amy at 3:58 PM