Translated from the Danish by Thom Satterlee
Bilingual Danish/English Edition 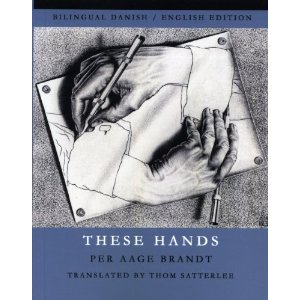 Semiotics is the study of signs and symbols and ultimately their meanings in communication. Cultural signs can be read simply by observing the clothes someone wears, the car they drive, and even how their home is decorated. Thus having someone who specializes extensively in semiotics and linguistics on a scholarly level is especially interesting to read as a poet; after all, poetry similar deals with signs and symbols in its presentation and understanding.

Per Aage Brandt is foremost a scholar-a professor with worldwide experience in clinical studies of semiotics, linguistics, poetics, and aesthetics-yet he’s also published numerous volumes of poetry. Reading his work is different from reading other poetry-his has an uncanny ability to carry multiple meanings without being ‘precious’; he covers serious subjects with regard but isn’t afraid to dip into light wit as well.

These Hands is an intriguing combination of his scientific method of observation and his selective use of specific words to get an idea across. The introduction notes that he’s one of the few, if not the only poet, to put his titles for the poems after the poem, instead of before. It sounds odd but it works. The title read last seems almost like a summary, or key words to remember the verses by.

In “visible, invisible”, he clues us into his perspective in poetry by commenting on how he sees this according to his training:

I see that you stare, and so probably also see,
But not what you see, I see; see this is a
Big problem for me: what is even more
Significant than that; but the door isn’t
Open, I can just lean into what you’re now
Saying you see;

…it hurts, never to be able to share what is seen
And experienced now by us and nobody else.

Brandt uses the underlying to emphasize that no two people see the same thing: they bring to their interpretation their own life experiences and opinions. Beyond that, even the physical distance two people may have as they observe one item can change their perception: light, shadow, and even sound can render their understanding differently. How perfectly, then, semiotics ties into poetry. The particular enjambment he chooses renders some words transparent or commutable.

“a study of the signs of life would include:
An exhausted smile stuck to the mirror, a
Colorless coat on a peg, a scarf typically
Forgotten on a chair, the sound of footsteps
From a possibly still intoxicated upstairs
Neighbor, an open window shaken by the wind…”

Another poem explores the significance of the written word to cement meaning:

“a phrase goes stray for a moment, and the wind picks it up,
Lets it blow into a face like a newspaper, and then it doesn’t mean
What it used to mean, now it means the aforementioned gust of wind
And also the strayness of the moment: the “writing” of the phrase
Is its weight”

At times, Brandt makes simple observations that give pause:

“time should stand still when I’m addressing it”.

I took a class on semiotics last year, and one of the tasks was to understand how symbols work in advertising-how by using art and graphics in a specific, intentional way can manipulate a consumer far more than words or testimonials could. Then it went into the types of literary motifs and themes that make a reader presuppose what the writer is saying. Somehow, reading that Brandt was both a scientist and a poet reminded me of Derek Walcott, and how by virtue of his Caribbean heritage, he didn’t fit in with American styles or traditional British writing, although he loved both. Brandt seems similar in that he can’t be pigeonholed into either role, but is renowned in both.

Special thanks to Host Publications for the Review Copy.
Posted by Amy at 1:13 PM