Molly Allgood O’Neill is a cranky old woman, weakened by extreme poverty and loneliness. An aging actress, she makes her way across London to one of the few jobs she can find-as a voice actress. Throughout her journey, she spends her time remembering the long ago affair she carried on with the Irish playwright, John Synge. In her memory Synge as well as the legendary Yeats come to life, and through her memories she gains a bit of vitality-all while so malnourished she can barely walk.


Her memory is detailed, and with equal parts humor and bitterness, she reflects on aging, competing with her sister, and the complicated socially-unbalanced relationship she had with Synge. His being of wealth and fame, and her poor urban upbringing, dooms their affair from the start. His mother will not consider him marrying her as beneath their social level. Molly’s sister too objects to the relationship, denying its reality. The Dublin theatre, and everything made up and false, becomes a key to understanding their attraction to each other as well as their eventual distance.

Molly is at her best when she’s thinking aloud. The author, Joseph O’Connor, presents her as a tough old bird who dismisses those beneath her, yet still partaking of their charity towards her. Especially touching is a local bartender who spots her a free drink on occasion, as well as a bit of food. They both keep up the pretense that she's a wealthy old actress, when without him she'd likely starve. In her small apartment, she’s down to living with that which can’t be burnt for warmth. Hunger grates at her, and makes her memories that much more painful.

She laments aging and her habit of talking to herself: “And getting up earlier. Another symptom, that. What young person ever got up at dawn out of choice? And talking to the wireless. And talking to the rain. And talking to dogs and to flowers in people’s gardens. And talking to clothes that don’t fit you any more and to dishes that need washing but haven’t been washed….and whoever puts the zips in the back of women’s dresses, a presumption, if ever there was one, that every woman is married…” 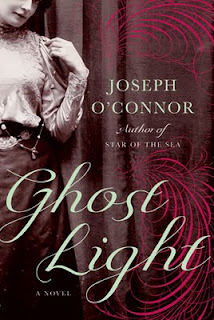 Her observations of the London neighborhood are sardonic and ‘cheeky’. One man that looks at her a bit too long gets her riled: “So turn the other cheek if you don’t like the look of me, and kiss my arse like it owes you the rent.”

The name of the novel comes from a theatre tradition: “An ancient superstition among people of the stage. One lamp must always be left burning when the theatre is dark, so the ghosts can perform their own plays.” The significance is obvious: she’s still alive while her peers are dead, yet who remain as alive in her memories.

As a character study, it’s fascinating. Seeing the character change as she observes Synge’s illness, and her reaction to the gossip about her is subtle-the author doesn’t tell us how she’s changed but shows us instead. A few times I thought the theatre scenes, where Synge and Yeats interact, ran a bit long (I sort of scanned those pages). Perhaps if I knew more of their actual history I’d have been more interested. The other thing that unsettled me was the ending. The book proceeded to a point that I expected it to end, it would have been perfect (to me), yet a new development occurred that continued it a short while longer. That put me off-track a bit, and it was hard to reconnect after what seemed like the obvious ending.

I could actually see this becoming a movie-there's enough action and drama that would go well with the Dublin and London period costumes.  I'd actually like to cast it:  Cate Blanchett as Molly, Viggo Mortensen as Synge, and Liam Neeson as Yeats.  That'd work.

Special thanks to Katie Freeman of Farrar, Straus & Giroux for the Review Copy.
Posted by Amy at 2:05 PM