Next World Novella by Matthias Politycki

Translated from the German by Anthea Bell
“Where his contemporaries succeeded, he stood aside. Luckily the details eluded him because he saw anything that was more than three to five metres away only in indistinct outline. Of course he noticed something was going on. He just didn’t let on, learned another language instead. And although at university he was at last considered a genius and quietly admired, he still always had to stand aside when the real prizes were handed out.” 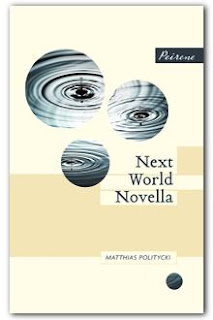 What real prizes? That question becomes the theme to this story of Schepp and his wife Doro, two academics who teach Chinese history and whose marriage appears solid on the surface. Schepp serves as an anchor to Doro as she has a tremendous fear of death---she worries obsessively about possible afterlife scenarios. Doro, for her part, is a quiet and agreeable complement to Schepp’s genius, and they raise a family together quietly and in peace.

That is, until Schepp has eye surgery to better his eyesight. Suddenly, everything changes…quiet and peace are no longer enough: the change in his vision changes his entire outlook on life.

“It was terrible to see the world in such detail, so sharply outlined, all of a sudden! It had always been so comfortably impersonal in its remote milkiness; Schepp hadn’t felt he was missing anything. Now it dazzled him with a confusingly large number of details… Overnight life seemed like one long missed opportunity. If he had previously renounced a great deal, never complained, he was now determined to make up for it.”

The novel begins ominously, as he finds Doro dead in their study (not a spoiler, it’s stated on the back cover!). As shock sets in, he is strangely unable to take the necessary actions, and instead finds himself poring over her notes. The Doro he discovers in print was one he had never seen, although he’d lived with her for decades. Thus the concepts of sight, vision, appearance, and imagination all combine to make this a suspenseful read, from the reality of his dealing with her corpse to the mystery behind her hidden personality.

Woven into the story of this couple is another story, one that Schepp wrote in his spare time, “Marek the Drunkard”. It has its own suspense and ties in to Schepp’s life as he both writes the story and somehow unknowingly appears in it. The denouement of it, a manuscript that Schepp had kept hidden and was somehow now edited by Doro, creates confusion and another element of mystery. It begs the question, how much of a writer’s own intentions and wishes are put into their writing? How separate can a writer be from his characters? Was it a novel that he wrote, or a wish list? An alternate life?

As the terrible day of his grim discovery proceeds, a sense of anticipation builds. I found myself mentally urging him to call the coroner, to put the notes away, to get some air. Yet he’s locked into that manuscript and what she’s written…this new woman he hadn’t seen before.

“He was in such a state that he accused Doro to her face of deliberately distorting the facts, of malicious insinuation. Angrily he asked her why she always had to destroy everything, even in death! Now she had gone and spoilt even this sad day for him…”

A thought-provoking read, I wish it had been longer! In a practical sense, it made me never want to smell cut flowers again, and I certainly will make sure my pathetic short stories are password-protected.


Special thanks to Meike Ziervogel of Peirene Press, London, for the Review Copy.
Posted by Amy at 6:39 PM