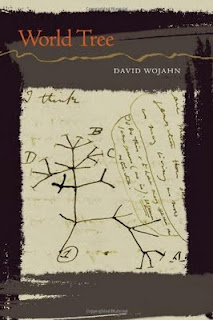 Private places and public spaces--David Wojahn uses verse to explore nuances of a distinctly diverse choice of settings.  Investigating the variances of humanity, all the forms of beauty and ugliness, he paints a picture sometimes brutal, and sometimes impossibly sweet.  From the beginning of one poem to the end, you're never entirely sure of the destination.  Many times I was intrigued at just how much emotion he evokes in a few choice phrases.

Designed in four sections, World Tree is a play on the concept of 'family tree'.  He extends the meaning to show the inner dependency we have on people throughout the world, whether we like it or not.  He illustrates the poems with an assortment of unusual graphics-the choices that serve as inspiration for some of the poems.  This is called ekphrastic poetry, using art or visual images to inspire the poem.  In some cases the poems are a reactionary response to the visual medium, at other times an attempt to explain the meaning or setting of the piece.  Or, as in some of the photographs Wojahn uses, the poem reveals hidden meaning behind the scenes.  Cave paintings and excavated archaelogical finds also provide potent ideas that Wojahn explores.

In one, "The Killed Man", he uses a cave painting that is thousands of years old.  He ties the old to the new in his imagination, making the ancient appear far more relevant than if observed on a museum wall:

"The stick man bristles with five sticks
& his insides pour out, a mesh of ochre,

Rendered childlike.  The invention of torture
Is so fresh they are confounded.
How to depict
The human figure mangled, the whole reduced
To the gutted sum of its parts...

They keep you chained & hooded on the flight
From Kabul to Gitmo.  They serve a meal

Of rubber hoses, then another.  The shackles
Gnaw at your wrists & ankles."

The basic image moves into the present, with the not-so-unfamiliar image of a tortured prisoner.  Has time not changed man's brutality?  Is there progress evident?

In "Trepanned Skull of a Woman with a Prosthetic Seashell Ear", he uses the fascinating photo of the shell ear (amazingly true to life) to examine the mystery behind it:

"The facts:  someone made a drill of flint
& bore into her cranium for hours,
a procedure
She survived, living on some twenty years.
Someone fashioned a device with which she might detect

The wave-crash of a sea three hundred miles away,
Worked shell to a phosphorescent simulacrum
Of auricle & cartilage, a lobe she'd worry
Until her fingers rubbed it smooth as skin.

Of untold mysteries we are composed....

...& was affliction cured?
&did she prophesize-oracle, priestess, sphinx?

Wounded goddess, did she unclasp her shell-ear as she lay down to dream?"

In the fourth section, Wojahn's focus is more on the public spaces and modern history, with references to the King of Pop, the Haiti earthquakes, and the endless 'crawl' of bad news on CNN.  His "Letter to Eadweard Muybridge" mingles details from the photographers 19th century life with present events, and shows that not much has changed.  "In the Domed Stadium" employs the colors of gray, black, rust, and crimson along with words like sizzling, jeering, rippled, and twitching to create a nightmare scene from the inside of the Louisiana Superdome after Katrina.

"Nocturne: Newark Airport" is my favorite.  Passengers are delayed due to snow, and the airport shuts down around them.  It's a "ghost dance" that appears, as some try to sleep, others try to read or explore the empty terminal.  The abandonment takes away the individuality of each person and makes it far more of an anonymous sea of blank faces.  Unity at last-all helpless to the power of the weather-leaving only a mute television scrolling death tolls that no one bothers to count.

This collection is poignant and deep...many of the references required me to look up some of them online to define and understand.  The way he ties abstract concepts to concrete images and responses is something that deepens this collection beyond what is typical.  It's one to read again....


Special thanks to Maria Sticco from U of Pittsburgh Press for the Advance Review Copy.
Posted by Amy at 7:43 PM