You Don't Look Like Anyone I Know by Heather Sellers, memoir

After a run of some really great reads, I have to say it ended with this so-so book.  The concept was so amazing that I was really looking forward to it, but it left me confused and ambivalent. 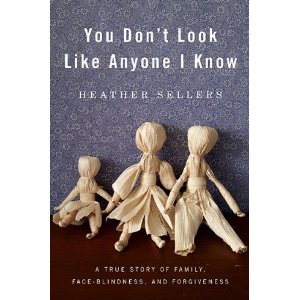 "Prosopagnosia" is a condition that author Heather Sellers has, wherein she is unable to recognize faces.  (At first I thought, lucky her!  There are faces I'd love to forget!)  She isn't diagnosed until her late20s and into her 30s, and so the difficulties she had prior to that she attributed to some sort of 'craziness' on her part.  She didn't know what was wrong because it was all she knew.  It meant that at times, she didn't recognize family members or friends, even up close.  Instead she recognized them by their mannerisms, voice, and the usual location that they appeared coincided with where she expected them to be.  A rare disorder, it is thought that the condition can be caused by emotional trauma, but all the facts about it are not yet known.

But trauma?  It's here.  I don't mean to sound flippant, because this is her real life and there's nothing light about it, but there is more trauma in this girl's life than most anyone can imagine.  At a few points I was reminded of James Frey's A Million Little Pieces, not because of his dishonesty, but because when I read it, I would think 'this can't get any worse', and then I'd turn the page to find that, indeed, it gets worse.  Her early life was lived with her schizophrenic mother who was categorically insane and kept her from ever sleeping more than few hours, but didn't appear to have any medical or psychiatric care, at least not an official diagnosis. Sellers didn't have the advantage of knowing things were messed up, she only suspected it and internalized it.  Her father was a cross-dressing drunk, who borrowed her nail polish and who was marginally less crazy than her mother.  She rotated between their homes, where food, cleanliness, and basic normalcy was never present.

The book starts with her making a trip to visit her parents, and the madness that ensues when she introduces them to her boyfriend and his sons, all after she's become a successful author.  It appears to be the first time she realizes that they are ill, and from there on, she explains how she recognizes that their illnesses likely influenced her own, and how she came to readjust both her thinking about herself and her feelings toward them.  It sounds like a lovely ending for such a traumatic beginning.  But several factors weren't addressed, and the omissions bothered me.

First, as she comes to her realization that they are very, very sick, she's in her late 20s.  A successful writer for magazines, she's also earned a Ph.D. and is a professor working towards tenure.  A very smart woman to be sure.  Yet how could she achieve all that and remain oblivious to both her own facial blindness and to her parents problems?  I wanted to hear more about how she was able to teach and achieve her notable success despite her condition.  Details, not just a brief overview.

Another aspect that bothered me was that in decades of looking back,  she was able to recount extensive dialogues of past conversations.  So much so that it doesn't ring true.  Is her memory heightened by the neurological condition she has, as a blind person often has sharper hearing than others? An explanation would have been helpful.   At one point, she relates when a man at a reading questioned her about the believability of her autobiographical writing, and while she admits to being uncomfortable with the question (she says in the book), she related to the man something that another author had said, that "when we wrote fiction, some kind of automatic story generated itself, based on what we knew about what we saw."  She never gave him a direct answer, and in this book she doesn't say directly what she meant, but it left an opening that wasn't answered...how much of this can be said to be accurate?  So much of the traumatic events she recalls deal with big things, yet she never explains how she coped with being left alone in a dark trailer in the woods with strangers banging on the door.  Explaining that she was frightened doesn't go far enough...what exactly did she do about it? While she discusses missing school due to her parents instability, she never relates how she got through a school day.  How did she relate to her classmates?  What did she eat?  How did she do her homework?  The extreme details recounted about her parents, some really over-the-top accounts, doesn't mesh with the very few details she reveals about her own survival.

Finally, the significant omission of any details from her brother leaves an empty hole in the history.  She acknowledges that for his privacy she'll let him decide if he wishes to tell his story.  I appreciate her candor in that and her respect for his feelings, but in all of her detailed accounts, one wonders where he is during all of this. Hearing how they related to each other during all this madness would have fleshed out the story even more.

It's an amazing story that leaves many unanswered questions. What she has achieved despite tremendous obstacles can't be minimized.  It would have been helpful to have had perhaps more details about herself and less about her parental extremes, as the shock value actually made it feel so implausible.


Special thanks to Riverhead Books for the Advance Review Copy.
Posted by Amy at 8:14 PM