Translated from the Ukrainian by Erma Odrach

Talk about a timely book! This novel is based on Theodore Odrach’s own life when Stalin’s Red Army came in to power in Belarus. Given that Belarus is very much in the news this week, with the controversy over recent elections and the beating and deportation of several journalists, it seems that a glimpse at its history is appropriate.

I know of several people who have read Wave of Terror recently, and all were moved by it because of how revealing the novel is about resilience, fear, and courage. Briefly, it deals with the experiences of a school teacher in the rural region of the Pinsk marshes-one who finds himself trying to walk the tightrope of pleasing the new regime without losing his moral balance. He is an endearing character, much like Ivan in Vasily Grossman’s Everything Flows. However, while the Grossman novel features Ivan looking back on his experiences, in this we see Kulik and what he is thinking as he experiences the significant events that turn the small region upside down, yet again. As an educated man, he is a threat to the Stalinist leaders, who give him simple advice to follow: 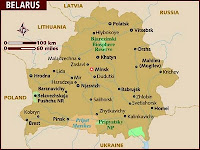 “I know you’re a historian with a degree…which is not to your credit. To put it simply, you have an education from a bourgeois institution where you were taught not only by non-socialist professors but also by pretentious, self-serving priests. You were educated in a hostile and unproductive environment. Take my advice and study the five volumes of Soviet history. Become a master of Marxist methodology…Give added attention to the Communist Manifesto, and learn how the capitalist classes of all nations will be overthrown and eliminated by a worldwide working-class revolution.”


The pressure to succumb to the indoctrination is great; if he doesn’t conform he will be shipped away to Siberia. Anyone can endanger him, as just the simplest lie about him from a student or associate will be enough to remove him, because the regime rewards those who inform. With a starving community and hostility around, every word he speaks endangers him, and yet “even silence could bring disaster”. The story of how he moves through this virtual minefield is both surprising and inspiring.

What is especially revealing about the novel’s voice is its coverage of the subject of languages. Having read a few Stalin-era books lately, I hadn’t quite caught on to how language itself is a tool of indoctrination. In Kulik’s rural village, the villagers normally spoke Ukrainian. Having been previously invaded by Poland however, they had been impelled to only speak Polish before reverting back to Ukrainian. Then the regime change insisted that they all speak Belorussian, but made clear it was a stepping stone to the entire area speaking Russian. Without access to their native tongue, the people had much of their culture stripped away, long before the Red Army came in and further eliminated cultural distinctions. Germany eventually occupied Belarus as well, which adds yet another linguistic layer to their history.

The language issue is significant because even now in Belarus, as its citizens are divided because those who wish to retain the Belorussian language and cultural identity (in order to prevent further “Russification” of their region) are outnumbered by those who wish to embrace the Russian language for simplification and economic benefit.  The loss of one’s native language means the loss of unique phrases, idioms, and subtle historical details. The poet Valzhyna Mort is one writer who is fighting for the language, which she describes in parts of her book Factory of Tears.

Wave of Terror also answered a question that had been gnawing at me. Why did the people let the Red Army take over? Why didn’t they resist more? In the narrative, a key element made a great impact on me: the people were hungry and without basic necessities. In this state of desperation, any change was embraced, even if it meant turning on lifelong friends or family, and even if the promised changes never materialized. Stalin’s leaders offered food to hungry people, and although they didn’t get much, they were easily manipulated. It’s the same sort of manipulation that Hitler used to great effect, as well as the Roman Caesars who were able to draw crowds to the gladiator fights with the promise of food. Without the essentials of daily life, oppression can easily take root, because the ordinary person has so little to lose.

Lastly, despite all the fear and suffering endured, it was interesting to read of what doesn’t change. Old married couples still fought and young people still sought romance. People still danced and enjoyed a drink and found pleasure in the simplest of foods. Perhaps this was the key to survival-maintaining their humanity and dignity when others lost their own.


Special thanks to Erma Odrach for the Review Copy.
Posted by Amy at 11:02 PM