An Epic Journey from the Stalinist Labor Camps to Freedom

Sticking with the apparent theme of Stalinist Russia and its aftermath, I found this memoir fascinating. It’s always more interesting to read a historical event in the voice of someone who experienced it, and the author Stefan Waydenfeld describes his experiences with detail and yet without bitterness. 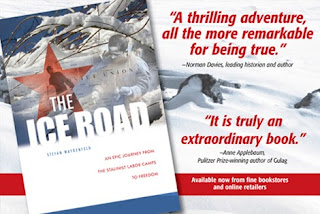 Waydenfeld was the son of a doctor and a biologist, and their small town life south of Warsaw was pleasant and fulfilling. He expected to live as most teenagers, with a future at university, perhaps following in his father’s path as a physician. While they’d heard grumblings of the war, they were taken by surprise when Germany and the Soviets invaded Poland in 1939. Previously, Poland had a non-aggression pact with the USSR, which was ignored as the USSR felt the need to support Germany’s war machine (as it had yet to turn on them). A bombing campaign started over Warsaw on September 17, 1939, one that introduced Warsaw as well as some of the smaller towns outside to the reality of war.

At first, Waydenfeld, at 14, served as a volunteer who worked in shifts with others to stay up at night and warn of the Luftwaffe planes that would randomly attack. They’d use whatever means they could to wake up their neighbors. Then there was the fires to deal with, started by the bombs. At one point, he describes the people fleeing the cities on open rural roads, being specially targeted by German pilots who ‘strafed’ the area with bullets for no apparent reason other than to kill randomly.

For a small time, there was a bit of calm, and then suddenly, his family received deportation orders to return to Warsaw. A kindly officer took them aside, assured them that this ‘short train ride’ would be their chance to return. They were loaded like cattle into a train with their neighbors and what goods they could carry, but he discovered on the train, at dawn, that they were heading east, not west. Never trust a kindly enemy! They were being sent to Siberia.

In Siberia, the Russian officers seemed to stress to them that their new life in Kvasha was going to be a privilege, and that they would never leave. Work in this camp was part of Stalin’s famous Five-Year plan. A major component of this plan was the installation and maintenance of the “Ice Road”, a timber transport road made out of sheets of ice. Waydenfeld and his father worked to build this road by digging holes, retrieving water, and then spreading it in sheets in -40 C temperatures.

From here, we see how his family coped, and how they were able to exist in this environment and maintain hope and unity. Additionally, while at times he admits anger and disappointment, his tone is one of bravery and acceptance…he was not going to give in. Not knowing about the atrocities that had already taken place in Germany may have helped these people keep their positive outlook.

It’s a great story, and well-told. I was particularly impressed by the effort he employed to acknowledge certain families and people that assisted in their journey to help them in various ways. He never implies that it was his bravery alone, but credits those people who were sympathetic and willing to risk their own lives to help them in various circumstances. This is an excellent text for information about the time period, and it would be amazing if high school students had the opportunity to read this first-person account.


Special thanks to Debra Gendal of Aquila Polonica for the Review Copy.
Posted by Amy at 12:05 AM