Translated from the Italian by Allan Cameron


“Every person is complicated, only in novels are characters consistent, while in reality we are all a collection of contradictions, without even realizing it, because man was not made to be summarized in a formula.” 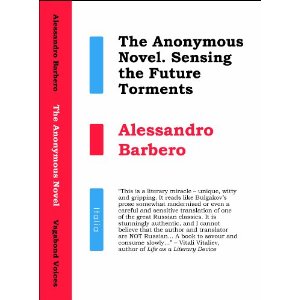 Alessandro Barbero’s novel about Russian life delves deep into the world of Moscow and Baku, yet in an extraordinary way. Rather than build on Russian stereotypes, like the underbelly of crime, excessive vodka, and jars of caviar mixed in with ruthless criminals and historical savagery, Barbero creates an entirely new type of Russian novel. Sure, those elements are present, but they aren’t the focus. The characters are complicated and new. And the provenance of this “anonymous” novel is new too.

The novel begins with a manuscript that manages to survive two literal burials in the ground. No one claims to have written it, and it’s stored an indeterminate amount of time. From then, it finally gets published. The voice of the unknown author introduces the reader to several characters in a rather short amount of time. But rather than simply describe them, he actually gets into their head, and at times we read of them in the first-person, hearing their stream-of-consciousness thoughts and intentions. Each character defies type, and all bear a bit of charm.

First is Viktor Nikolayevich Obilin, a college professor who lives alone, simply, and who makes acerbic comments about politics in Moscow. He takes ironic note of how the citizens of Moscow are insisting on government ‘transparency’ and he is aware of how dangerous transparency and the search into the past may turn out to be. For one thing, he has a student researcher, Tanya, who is doggedly pursuing her thesis about Stalinist party members in Baku in the 1940s. This is a dangerous period in Russian history, as Viktor observes “these were years you hurried over without going too far into details: you just gallop along until you get to Sputnik and Gagarin into space. Then you can breathe freely again.”

Tanya is well aware of the deception and atrocities that occurred, war crimes that have gone unpunished for many. One typical crime was when an informant rats out a colleague, has them sent to the labor camps, and then assumes their identity. Her research into Soviet party cadres has a personal connection, and nothing is going to stop her, not even the ‘old school’ hardliners that pressure her professor, Obliin, to cancel her research. “I need to know what happened, and to understand history you need to follow it through. You can’t just stop at some random moment. You need to go even beyond…” Her boyfriend Oleg, a journalist, thinks she’s going overboard.

Then there’s Mark, a struggling actor who has a bizarre hobby. Besides drinking heavily, he collects old photographs and archived documents from the SS’s files, and is writing a novel based on the connections he’s imagined between the names and dates. Then we are introduced to my favorite character, a honorable judge named Nazar Kallistratovich Lappa who is trying to restore a law and order into daily life in Moscow. At this point, just when I thought maybe I should be taking notes on all these characters, the author speaks directly to the reader: “What do I hear you saying? Yet another character! You bastard, could you try not to get lost in your own plot, and remember: sooner or later you are going to have to gather up all the various threads and make some sense of it. Listen, my impatient masters, the threads will be gathered all in good time…so trust me.”

Throughout the remainder of the novel he does indeed tie up the threads, making the story serious in the historical aspects yet with a bit of humor and irony thrown in. I can’t say enough about the way each character is built; seeing their inner thoughts as they struggle to do what is right as opposed to what is easy gives them far more depth than just describing what they said or did.

On a larger scale, outside of the plot, Barbero comments on the outsider viewpoint of Russian history, and the way it is often revealed only in an interest in the writings of Pushkin or Gogol, “history has simply become a commentary on literature.” He wants to demonstrate that only the famous writers or despicable leaders are what capture interest, rather than this complicated people who have endured decades of hardship. Look into those people, and their lives, to find the answers to the last century, he implies.


Special thanks to Vagabond Voices, Scotland for the Review Copy.
Posted by Amy at 4:01 PM