“Maybe it’s all for the better. You weigh the clean air and water, the way the rivers have come back to life, against the boarded up storefronts, abandoned downtowns, suicides and divorces, low wage jobs or no jobs at all….I don’t have the heart to balance the scales of misery and hope and come up with an answer.”

Thus writes Michael Adams in his poetry and short prose collection, Steel Valley. The collection is diverse, but most of it dwells with the historicity of Pennsylvania’s steel industry, one that had dominated the world up until the 1980s. It was known as the largest steel producing region in the world, one that supplied materials, iron, and armor to Union soldiers in the Civil War, and through the 60s and Vietnam (source: www.riversofsteel.com).

“Iron ran an endless river – to railroad cars, rolling mills, tanks, Camaros, refrigerators, machine guns. It was a river that ran while King and Kennedy were killed. A river that ran through the guns of the soldiers-kids like me….A river that ran in a bloody stream stretched halfway round the world to sear the flesh of men and women I would never know, but start another river running, redder and hotter than molten steel.” (from “Steel”, p. 17)

Besides providing work for generations, the industry made its own mark on the region. The valley likely imagined its steel domination as permanent, not foreseeing the devastation left in its decline. Adams similarly addresses human nature’s tendency to assume what is in place will always remain, allowing it to be taken for granted, instead of understanding that there’s always an end. In “Monongahela”, Adams describes his ambivalence about the river that twisted through the steel valley:

“Looking back now, forty years gone, my lack of curiosity about the river I lived with daily disappoints me. Maybe that’s the way of youth, to be fixated on origins and ends – things far off, the cold mountain spring, the distant sea, not the everyday….I carried with me in those days, before life touched me with failure and some sympathy, the hard stone of intolerance that the young may bear for the familiar, to mask their fear and uncertainty.” 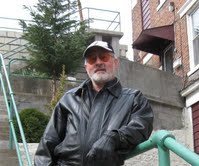 I only wish I could show the enjambment he used to heighten the impact of his realization. He contrasts this with an appreciation for the hills he hiked, in a nod to Thoreau. “With friends, with lovers, or alone, but always with the woods, happy, broken-hearted or not knowing which, wandering the wild rugged hills.” (“I Went Out”, p 27)

My overall response to his collection is a sense of permanence, and how one person can be marked by a place no matter how far away from it they travel, literally or figuratively. It combines unsentimental reality with the fragile emotions of memories. His choice of vocabulary reflects the industrial scene and events:  concrete terms that instantly create an image. And too, he gives a sort of manly acknowledgement of the frailties of life; he picks up on the hardship suffered by the nameless faces we meet. He sums this up in “Do You See That Woman” on page 37:

“Okay, you’re young, and you’ve never had to face it, how it wears you down, the small daily humiliations that come at you from all directions, but here’s something you should know. Everybody wants to take pride in their work. Learn that one thing, really learn it, and you’ll do okay in life.”

This collection is published by Lummox Press, and is available through their website
as well as on some online retailers. www.lummoxpress.com
Special thanks to RD Armstrong for the Review Copy.
Posted by Amy at 12:05 AM