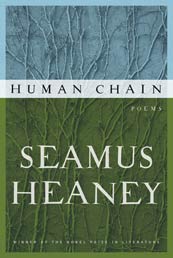 I'm not even going to think about calling this a review of Seamus Heaney's latest collection of poems, Human Chain..  It would be incredibly presumptuous on my part to even suggest that I'm going to "evaluate" his work (of course, normally I'm always presumptuous in terms of reviewing!).  Instead, I'm going to just relay a few points that I love about this amazing poet, and why you should read him if you haven't already.

For one thing, his writing style is so straightforward and concise.  It's not fluffy or ostentatious or full of bizarre allusions that make you feel ignorant for not understanding.  Instead, he writes like a reader, with spare words that draw crisp pictures.  Yet his poetry does have layers...you can find multiple meanings if you ponder what he says, so they still have depth and are certainly not simplistic at all.  In fact, in many ways his simplicity is deceiving.

For example, I recently re-read "Digging", a poem he wrote in 1968 about a man admiring his father's and grandfather's strength as they turned over turf and worked the land in Ireland.  He concludes the poem with something along the lines (I'm paraphrasing) that 'I'll have to do the work with my pen'.  What initially is a pleasant enough little story (hard work, family, nature) suddenly had a deeper meaning and then, "digging" into it, one could see he was commenting on the struggles of Northern Ireland and showing the violence that was sometimes used to create change in the Republic.  He never got pushy or overtly political but you could clearly see that he was sending another message.

So, in reading Human Chain, I was again dazzled by his subtlety.  In one poem, "Miracle", he leads the reader into another direction of thought as he reconsiders the Biblical event of Christ healing a lame man:

Not the one who takes up his bed and walks
But the ones who have known him all along
And carry him in-
Their shoulders numb, the ache and stoop deeplocked
In their backs, the stretcher handles
Slippery with sweat.  And no let-up
Until he's strapped on tight, made tiltable
And raised to the tiled roof, then lowered for healing.
Be mindful of them as they stand and wait
For the burn of the paid-out ropes to cool,
Their slight lightheadedness and incredulity
To pass, those ones who had known him all along.

Here,  he's stepped back from a significant event to expand on its effects to those out of the spotlight, observers on the periphery who are also altered, although less obviously.  In "Slack", he writes about the repetitive and mundane nature of storing coal for the fire, and shows what the symbolic heat means for the home:

A sullen pile
But soft to the shovel, accommodating
As the clattering coal was not.
In days when life prepared for rainy days
It lay there, slumped and waiting,
To dampen down and lengthen out...

And those words-
"Bank the fire"-
Every bit as solid as
The cindery skull
Formed when its tarry
Coral cooled.

Here he illustrates the fragile balance of life and death as dependent on the existence of the humble coal;  and foreshadows what happens when the coal runs out.  In that case, the cold shells of the fire appear as "skulls".  So is he talking about just a home fire or the flame of one's heart?

Finally, the most poignant of all is "The Butts", where the narrator describes searching through a wardrobe of old suits.  He describes how they "swung heavily like waterweed disturbed" as he checks the pockets and finds them full of old cigarette butts, "nothing but chaff cocoons, a paperiness not known again until the last days came".  Colors, sounds, even odors are a part of the poem as he leaves you to wonder why he's looking through the clothing.  Hinting, but never direct, one senses that Heaney is describing the search for a proper burial suit. For a father?

Throughout the collection, varying dedications for the poems give the sense that Heaney wants to go on record with his past and make the connections that are implied with the title, Human Chain.  When I first looked at the cover, I thought it was of trees branches, maybe birch, threading out to tiny tips.  Then I was alerted to a possibly different meaning when I saw a microscopic picture of the human circulatory system-the blood channels that look so similar to branches.  In either case, Heaney has shown, again, an amazing grasp of the connections and complexity of the human condition.


Special thanks to Farrar, Straus and Giroux for the Review Copy.
Posted by Amy at 9:37 PM