A Reykjavik Thriller
"How many trees is a forest?" 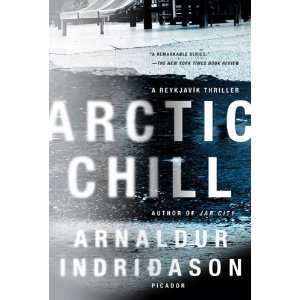 Arctic Chill is part of a series of police procedurals by Arnaldur Indridason.  Set in Iceland, the cold climate plays its own role in the mysterious death of an eight-year-old boy.  Three detectives, each complicated individuals on their own, combine their efforts to search for the murderer amidst the suspicion that the murder was racially motivated.

Suspense was present throughout, and many of the characters involved are not the typical detective novel stereotypes that often show up in a successful series. The case doesn't have an easy resolution, and the detectives are not the Hercule Poirot-type of mentalist who seem to rely on hunches.  Instead, real detective work, involving tedious interviews, re-analyzing evidence, and following leads is the way the murder is solved.  You don't often see this much focus on the little repetitive details of detective work in crime novels, as some authors may think it's too trivial to be of note.  Yet in this, it really works.  In fact, the very unspectacular and terribly unglamourous procedural work is what creates the suspense.

I enjoyed the novel immensely-it was a great cold weather read.  And since I've been reading so many Icelandic novels recently, some of the descriptions of the locations felt familiar and made the story more personal.  I haven't read any of the other books in the series, if I had, I may have even enjoyed it more.  Because for me, one distraction was in the beginning of the novel when the three detectives begin the case.  I was confused as to who was in charge, and it seemed like equal weight was given to each of the three.  I'm not sure why, but it felt disorienting, like I really need to know who the 'lead' was to get involved.  And by half-way, I understood.  But until then, it nagged at me a bit.  Those familar with the series obviously wouldn't have this problem.

Other small details bugged me:  one was that there seemed to be several threads of storyline that were irrelevant to the story but were probably far more important in the series.  That's fine if each reader knows that it's part of a package;  for me, there wasn't enough substance to the threads to make sense of why they were present, and they seemed to slow down the narrative.  Finally, one especially obvious blunder (eventually set right) seemed easy to spot...it foreshadowed far too much and made me question one of the detectives capabilities.  Lastly, while the detectives were interesting, I didn't find any personal draw to any of them...their hard work and intelligence was apparent, but nothing about them made me really care about them as individuals.

In all, this was an absorbing read, and I do plan to read more in the series.   A special comment has to be given to the beautiful way in which he describes the landscape and light that remains in the background of the scenes.  I'm curious to see if my take on the detectives will change after I read more of the titles.  The next one after this is Hypothermia, which I've heard nothing but good about.


Special thanks to Picador for the Review Copy.
Posted by Amy at 3:56 PM