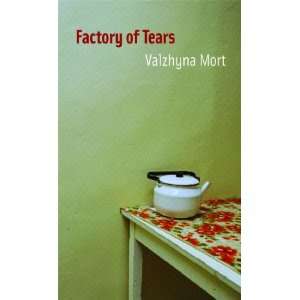 Valzhyna Mort is a Belarusian poet whose voice is unapologetic and smart.  She doesn't mess around trying to beautify what is not...and yet, she finds beauty in unexpected places.  Her poetry doesn't back away from the controversial.  This collection is the first book of Belarusian/English poetry published in the US, for which Copper Canyon Press can be very proud.

Belarus has a rich and sometimes violent history as part of the former USSR, and a place where the matter of national language is still debated.  Most residents speak Russian, and one source states that only 11% of the population actually speaks Belarusian.  Proponents of each side don't appear to have any agreement in sight*.   And yet, there are those, such as Mort, working hard to maintain the historical language of Belarus.  In any case, Russian and Belarusian are similar and with additional borrowed Ukrainian and Polish words, the language of the country is rich.  Mort even addresses such complexity in one poem, where she considers "how do two languages share one mouth/like two women in one kitchen"?

In this language that reflects history and culture, Mort writes equally reflective poetry.   "In memory of a book": 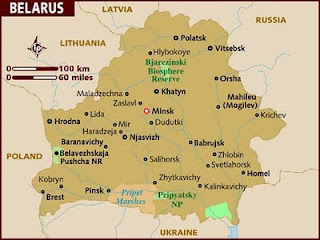 In one entitled "For A.B.", she paints a parallel between children and identity as well as heritage:

and this is why we wake up late at night
and light up the candles of our tv sets
and in their warm flame we recognize
faces and cities...

Somehow I picture the typical wornout world map, with its faded blue background and the mysterious lines, as a background for this poem.  How strange to live in a place where the lines have moved, often inexplicably!

There is a moodiness to the poems that lends itself to topics of dreams, life, and death.  Humor is sprinkled throughout and she uses images of tears, hair, and children to personalize the mysteries of belonging and believing.  Her youth is evident in crisp words that are magnified by the enjambment so that we feel the anxiety and confusion.

Special thanks to Janet Jones of Copper Canyon Press for this review copy.