Fact:  Nobody likes an arranged marriage. 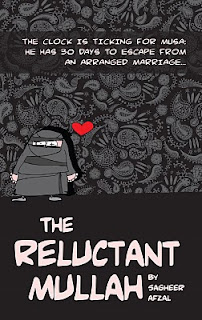 It's on this basis that the novel The Reluctant Mullah makes its case.  In it, Musa has just thirty days to find a wife that he actually likes, or else he's stuck with the one chosen for him.  He fears who will be selected for him, as it goes against every romantic bone in his body.  Thus, he begins searching on his own.  It's not simple, as Muslim tradition makes getting to know any woman a near impossibility.  He's aided (and thwarted) by friends more bent on the humor of the situation than by real concern for his future.

Musa himself is intriguing.  Besides his romantic nature, he has a sense of humor not expected from a Westerner's perspective.  For example, he sings Sinatra music, "My Way", but changes the words:
"And now the end is near, and so I face the final cousin.  My friend, I'll say it clear.  I'll state my case of which I'm certain. I've been to muslimbrides, I've travelled to each fa-mi-ly.  But more, much more than this, I did it my way."  It's his irreverance mixed with a shocking amount of modern humor that makes him an extremely likable character.

The novel makes a fascinating read because it discusses Muslim culture without delving into political or religious polarities.  Instead, it focuses on the social life and complications of people dealing with both tradition and outside influence, all in a modern world.  I appreciated that the women in the story do not appear to be slavish nor repressed, but rather amusing and sassy and quite capable of taking care of themselves.  In fact, what surprised me most was how close family ties were, especially with aunts and uncles all concerned and involved in each other's lives.  Sure, Musa finds it a bit obnoxious as he seeks true love, but the unity and reliability on each other is inspiring. 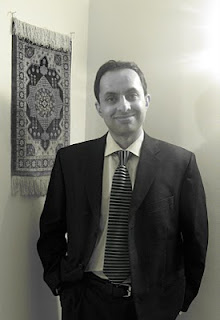 In all, this was an amusing novel that still had a share of deeper complexities.  Because, despite the humor and ridiculous situations that Musa finds himself in, a darker side of tradition will still assail him. He finds love, but he finds heartbreak as well.  This is what makes the novel both timeless and appropriate for anyone:  affairs of the heart know no national, political, or religious boundaries.


Special thanks to Martine of Halban Publishers, UK for the review copy.
Posted by Amy at 11:47 AM