The Mermaid and the Messerschmitt, Rulka Langer

Originally published in 1942, Aquila Polonica has reprinted this in a stunning new edition.  The first thing that jumps out at you is pictures!  Lots and lots of pictures, particularly focused on the Siege of Warsaw, which is the focus of the book.  In addition, maps and timelines assist in understanding the events before and during WWII. 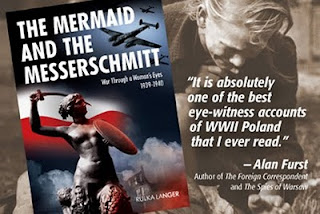 First off, the female author adds a unique voice to the usually male-dominated subject of wartime.  She also explains immediately why her story is different from what a war correspondent for the news might write.  Her presence as a mother with an extended family gives her a different viewpoint:

"A war correspondent, when he runs to that gigantic fire (her example), does not leave his own children behind in his hotel room.  When caught in an air raid, he doesn't tremble for the life of his own old mother.  His brother has not vanished somewhere on the crowded roads...it isn't his own house, the house in which he was born and has lived for years, that has been set on fire by an incendiary. And if he himself goes through the agony of mortal fear, none of his readers will ever know about it."

As a narrator of the horrors, Langer is ideal.  For a time before all this occurred, she had lived in the United States and had attended Vassar, and then became a copywriter for an advertising agency.  After marrying and having a child, her husband became the Commercial Attache at the Polish Embassy.  Eventually he resigned and they went back to Poland, but in 1938 he had another opportunity to work in the US.  She remained in Poland, on a temporary basis, planning to rejoin him.  However, as WWII heated up, she ended up in a small town with her mother and extended family, hoping to wait out the storm.

The book goes on to detail the fears that residents had, as well as the thread of suspicion that wove through daily life.  At one point, when she travelled to try and find a way to get to Warsaw, she was arrested by a band of women with pitchforks who assumed she was a German spy (her missing passport didn't help her case).  While many Warsaw residents had fled the city, Langer and her mother actually decided to return there, because the refugees who fled were equally endangered, and the prospect of travelling with small children seemed questionable.  They returned to an apartment thoroughly shelled, without windows, and with its contents turned to rubble.  Here they tried to reclaim their life and wait out the Siege.

It's this personal aspect that makes the book most involving.  As a mom, hearing how she attempted to feed her children and create some semblence of normalcy, no matter how fragile, was amazing.  Entertaining them, distracting them from their fears, and still maintaining a sense of calm is hardly imaginable. When a fire began on their roof, it took 48 hours to get help.  Without panes of glass in the windows, they nearly froze in their apartments.  Small details jump out the most:  how a copy of Gone with the Wind seemed to inspire her to hold on to her old clothes lest she have to use the drapes for fabric.  How rumours and gossip made fear escalate even more.  And how, even in extreme danger, women will still bicker over the price of produce!

Another intriguing part of the book involves her creation of a new business to try and make money. Since newspapers no longer circulated, and the Poles desperately needed items that would normally be offered in the classified ads, Langer used her advertising background and a friend's help to create posters of small items for sale.  Despite interference from the German's occupying Warsaw, they still found a way to post these and make a small amount of money.

In all, her family suffered greatly during the Siege and family members was tragically killed.  But Langer and her children survived and were able to get to Vienna.  Soon after, they left for America.  I'm most amazed at how readable this is compared to other books about the war experience.  Suitable for all ages, it would make an excellent resource in a classroom and a stepping stone to further study on the Siege of Warsaw.  Hearing from a survivor about the human capacity for resilience and inner strength is motivating, especially in a time when nothing made sense.


Special thanks to Debra Gendel of Aquila Polonica for the Review Copy.
Aquila Polonica also produces a DVD of the Siege of Warsaw available on their website,
www.aquilapolonica.com.
Posted by Amy at 5:40 PM