Safe from the Sea, Peter Geye

The wreck of the Ragnarok, a steel ore ship in the Great Lakes, was a disaster that took the lives of all the crewmen, except for three. One of the survivors was Olaf Torr, a talented Norwegian immigrant who lost friends as well as his life path in the disaster. Returning to his family, he was a changed man. 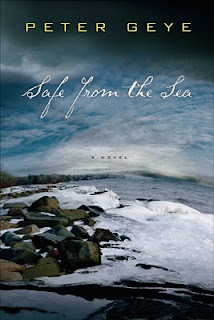 “You end up a line in a poem, as a face in a picture in a museum. Meanwhile, your crewmates are dead and you haven’t talked to your wife-honestly talked to her –in years. And your kids grow to fear you. And instead of making it right you let it ride. You drink in the raunchiest bars in eight states…And you lose all shame.”

This broken man has reached the end of his life, suffering from an unknown illness, and in his final days his son Noah reluctantly returns to take care of him. Their relationship was never strong: Noah resented his father’s distance and his father was too wrapped up in the past to relate to any of his family. Their reconnection after thirty some years, with death impending for Olaf, is an awkward situation as both of them try to narrow the distance.

For his part, Noah is confused. His father was always a hero to him, and the legendary wreck of the Ragnarok was the small town’s biggest event. Many recollected the events without realizing the human effects on Olaf-a sort of survivor guilt he was burdened with. In many ways, neither man trusts each other, or their concept of family connection. Add to this the unresolved anger that Noah carries because of the way his father became a drunk and distanced himself from Noah’s mother. Early on, Noah learns that his father has lost his mothers ashes-somewhere-and that outrages him.

As Noah returns, trying to find a way to help this dying old man who resists any comfort (he refuses pain pills or physical comforts), he realizes that there’s more to the shipwreck than he realized. As they spend time together, Olaf is able to educate Noah about the wreck of the ship, the horror of the loss of life, and why the family relationship deteriorated from then on.  He clears up many of the assumptions Noah had made.

As a character study of both men, this book is amazing. It reveals fully-formed real men with honor and flaws in equal portions. The novel, by Peter Geye (his first, by the way), is amazing in how he balances both strong characters. He doesn’t magnify one over the other; he simply describes them and the mistakes they’ve made.

However, most books with strong characters usually weaken in plot. Yet the plot in Safe From The Sea is equally strong. The course of reconnection, the history of the wreck, and the effects on the Minnesota community make a suspenseful plot with twists and surprises. Noah (whose name appears somewhat symbolic) learns that his assumptions from childhood were wrong, and that somehow he had romanticized the idea of the wreck of the Rag.

“He remembered chalking it up to some kind of ambivalence toward his father, but in retrospect it was an ambivalence borne by the unconscious knowledge that what his father had just said was-and always had been-the truth. Twice already he’d alluded to the commonness of the crew, and twice now Noah had paused at the realization of this deflating fact: They weren’t gods and giants sunk on that ship, they were men and boys…..


“Isn’t it more fantastic to think of the guys who died as a little bit heroic, as swashbuckling sailors? As something more than a bunch of yokels from Great Lakes port towns?

The two men share companionship and resolve their differences over the last days of Olaf’s life. Noah is relieved to have resolution, until his father asks him to do one further, unimaginable, thing for him.


Special thanks to Caitlin Hamilton Summie from Unbridled Books for the Advance Review Copy.
This title released yesterday, 9/28/10 and can be purchased at major retailers.
Posted by Amy at 4:01 PM