For cat lovers, this made me, my boys, AND the baby laugh:
http://www.youtube.com/watch?v=I1qHVVbYG8Y 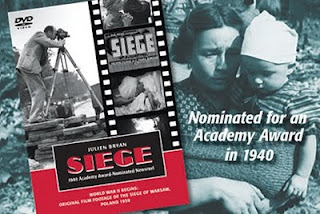 Siege:  Arriving in Warsaw a week after the Nazi German invasion of Poland, American photojournalist Julien Bryan was the only neutral reporter who remained in the city. He survived two weeks of devastating bombardment—risking his life over and over again to record this unprecedented new form of warfare: Blitzkrieg, Adolf Hitler's "Lightning War"—and the agony and bravery of Warsaw’s civilians under the merciless German attack.  This was amazing but incredibly sad too...knowing these scenes were real.  It's not long but the DVD has extra features... Special thanks to Debra Gendel of Aquila Polonica for the DVD and the stack of books (upcoming reviews!)...

180 South (documentary that combines surfing, mountain climbing, Chile, sailing, and gorgeous photography in one fascinating story):
Inspired by pioneering outdoorsman Yvon Chouinard's freewheeling 1968 van trip to Patagonia, South America, a band of bliss-seeking surfer-mountaineers sets out -- in 2007, by boat -- to remake the journey in this adventure documentary. Jeff Johnson and his buddies hug the coast, stopping at the Galapagos Islands and Easter Island before arriving in Patagonia -- a region that's still breathtaking but is now besieged by environmental threats.

Objectified:
Described on Netflix as:
Discover how manufactured objects that surround us such as cars, phones and chairs influence our daily lives with this revealing documentary, which features top industrial designers discussing their creative processes and professional objectives. Director Gary Hustwit (Helvetica) explores not only how objects get made, but also why they make us feel the way they do and how they can make our world better.  Translation:  really cool documentary on design in everyday life.


if necessary the door is kicked open
Posted by Amy at 10:47 PM