Man in the Woods, Scott Spencer

“The things for which we feverishly prepare aren’t generally the things that actually happen. Our undoing comes waltzing in through another door altogether…"


Can good work make up for an evil deed? Is punishment really necessary if a perpetrator is sincerely sorry? Can you hide your past under a new persona? 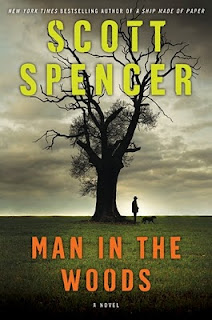 These are the sort of questions that Man in the Woods, by Scott Spencer, wrestles with in its exploration of intentions, deceit, and repentance. The story revolves around a large number of characters, most of whom are deeply flawed and trying to start new. Spencer explores more than just their actions but their motives for why they want to change and their methods for doing those “good deeds”.

One character is Kate, a newly sober author who fancies herself a spiritual leader for other women involved with alcoholism and drugs. She’s attained a huge following of somewhat pathetic women who seek her out-crediting her with saving them from themselves. She plays to this crowd, creating a social persona of goodness and light that she’s manufactured into a million dollar conglomerate. From poverty to wealth, she’s reinvented herself in a glamorous life of public sympathy and private consumption. That her spirituality is just a façade is obvious early on-she’s completely unable to even relate to her pre-teen daughter and instead puts her efforts into pleasing her audience.

Paul is her boyfriend, an incredibly talented craftsman and artist who claims not to mind his house-husband status, yet chafes at her lavish lifestyle. He is a simple man of few words, and picks up the slack in showing kindness and concern for Kate’s daughter, Ruby; he’s a far better parent than Kate is, and recognizes certain emotional problems in Ruby that Kate is blind to. It’s clear he’s a stable man with good intentions all the way around.  His own past was such that he desperately wants to create a positive future.
Finally, there’s Will…a complete creep and hardened criminal on the run and hiding from his past. He’s a pretty much worthless lowlife who breaks up with a woman and steals her dog, just to get even. In fact, it’s the dog that plays a key role. When Paul and Will cross paths, Paul steps in to stop Will from beating the dog to death. Their interaction is the key to the story and the concepts of personal worth, humanity, guilt, and redemption.

All told, this is a brisk and sharply paced novel that wastes no one’s time in unnecessary details. The narrative switches between characters and reveals little nuggets that make it easy to picture them. For example, Kate’s signature greeting is “Hey there, ho there!” What more do you need to hate her? Her inventive theology is such that even she doesn’t buy it, and her act is pretty weak. Yet she pitches the same corny platitudes to anyone who will listen. She’s possibly the most astonished when Paul, deeply grieved over something he’s done, actually buys into it himself. Suddenly he’s eager to hear more, and her stage act  is now playing out in her home, requiring her to unveil some sort of validity to it.

“She had already begun on the path she had chosen, which was to keep him safe, this man, her man, who, except for that one terrible thing, did nothing but make life better for everyone around him. Ignorance wasn’t bliss, but rather a gauzy scarf thrown over the lamp of knowledge, coloring the light, making it less harsh.”

Watching these characters interact was interesting, especially when you see how easy it is for them to justify a self-serving course and cover wrongdoing when the only alternative means their losing face and prestige. Kate is, frankly, one of the more irritating characters I've read recently, which shows the skill on Spencer's part to make a reader feel a part of the book.  While it's an excellent read, I did find that the ending sort of slipped.  One scene features an improbable gathering of nearly every character, around a table of food, and somehow that part and what followed made the denouement less spectacular than I expected.  There seemed to be a few too many substories and threads going through the book that all tied together a little too neatly for reality.  However, just the moral issues that are faced, and how they are handled, make this both absorbing and enlightening.


Special thanks to Ecco Books for the Advance Review Copy.
Posted by Amy at 12:05 AM