Observations from Off the Grid - Angela Long

The concept of living off the grid seems to be new and somewhat hip: it implies a choice to give up city life and live off the land, somewhere obscure (yet scenic), where you might grow organic veggies for your raw food diet. Many who do this feel safer, distancing themselves from a world that becomes more Orwellian each day. Some who choose this life may appear a bit snobby about it: they are lessening their carbon footprint and becoming closer to the earth, often suggesting you should too. Good for them. Swell. Whatever works. 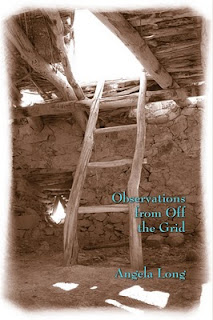 However, in this collection of poems, Observations from Off the Grid, by Angela Long, we are introduced to the reality that a large number of the planet’s inhabitants are already ‘off the grid’, and they have no choice in the matter. It’s not a concept of going without, they never had it to begin with. Long is a traveler, and her travels are wide and varied. She reveals many ugly things, but she doesn’t dwell on them. Instead, you sense a bit of awe emanating from her prose: she is amazed by what people endure in their ordinary lives.  Most interesting to me is that she doesn't usually choose the scenic route in her travels;  she's more likely to be volunteering at a school than lazing around the hotel bar or perusing the gift shop.

The collection begins in Guatemala, where disappearances and murders are commonplace, a daily ugliness. She teaches locals, thus the “English Lessons” portion of the book that tries to make sense of how location relates to understanding the language. For example, how do you teach the English words for colors, often using the colors of a stoplight, in a village with no real road? How do you give significance to the names of the days of the week when everyday is more of the same? In one instance, she asks the class their favorite foods. Their response?  Tortillas and beans. What other option is there? And yet she’s honest enough to admit she’s craving Thai Noodles and Pizza Margherita, despite her efforts to eat as everyone else. She describes four of her students and each shares their heartbreaking stories: of soldiers brutalizing a village, and boys forced to kill their own people.  What is more poignant is that they quietly endure this regularly in a place where violence is an everyday occurence.

In “Defection”, she describes the process of trying to live in this new place and forget her previous comforts.

“Acclimatize my blood until I shiver
at twenty-two degrees.
Slough away my dead skin until I glow
like burnished earthenware.
Teach me how to long
for a bowl of rice.

Take this passport, this phone, these keys.
Take this house.
Build me walls that splice
darkness with ribbons of dawn.”

Seeing firsthand the violence that is commonplace, she relates the advice from a guide to Central American travel in “Warnings to Travellers”:

Do not necessarily be alarmed
by ‘gunfire’
which is more likely to be fireworks,
a national pastime,
especially early in the morning.

Later, Long reports from India and describes the strange clash of cultures between tourists and residents. Apparently, tourists purposely seek out cremation ghats, as if they are a spectacle for their particular entertainment. Yikes. She also depicts the fear revealed when dealing with poverty face-to-face. In “Pilgrimage to Bodhgaya”, she explains how difficult it is to follow popular ‘tourist’ wisdom to not give to beggars, while realizing a starving child is watching you eat an ice cream cone:

"Walk.
Walk briskly.
Hold head high.
Ignore the man
with stumps for legs
propelling himself along
(at an alarming pace).
With stumps for hands
On a board with wheels…
Ignore that his stumps
Are so worn they shine.
Don’t make eye contact.
His eyes are too bright.
Too beautiful.
Walk even more briskly.
He’s catching up.
Run. Run if you have to.
Run.

There’s so much I could quote…I marked several passages and kept revising which I thought were best. She's incredibly honest...you can see her thoughts as she tries to navigate the 'right' thing to do in a place that is all 'wrongs'.  Ironically, she does address Westerners who choose to go ‘off the grid’, and describes life in the Pacific Northwest, next to the sea, living a simple life of fresh food and homemade wine. It’s not nearly as snobby as I imagined it would be-there’s no self-righteous attempt to justify the lifestyle or push it on others.

In “Notes from Off the Grid”, she describes an especially alluring benefit to this lifestyle:

“It has a sound, a fullness.
It’s heavy with sigh of tree,
And space between breaths.
It’s ripe with pause between birdsong
And crash of surf.
It’s golden, they say.
But no one tells us it’s addictive.

….this is why people become hermits.”

After reading those verses and the sections on this life-style, I'm all for it. Bring it on!  Seeing as how Long has travelled so extensively and with such bravery and awareness,  this collection is possibly the finest souvenir she could have returned with.

Special thanks to Manolis of Libros Libertad (Surrey, British Columbia) for this Review Copy.
Posted by Amy at 12:05 AM