Beside the Sea, Veronique Olmi

Translated from the French by Adriana Hunter 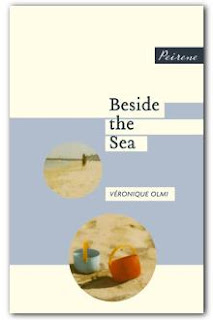 It's difficult to decide what subgenre this literary fiction title would fall under.  In some ways, it's a crime novel, with the crime heavily foreshadowed from the beginning.  But, more likely, it would be a psychological thriller, one that has you holding your breath from the suspense and completely terrified by what you know is going to happen.  In either case, this book has an emotional pull that can't be resisted, even though you may wish to step away from it at times.

The story is of a troubled woman, a young mother with deep mental issues, who decides to take her two sons on their first trip from their city home to the sea.  Right from the beginning, this mother also indicates it would be their last trip as well.  They arrive to a dark and dismal seaside town, where the sea is far from lovely and the streets are filled with oblivious and often harsh strangers, with no idea of the horror that is unfolding.

In some ways the book appears to be working backwards from the inevitable crime that appears at the end, simply because each detail succeeds in predicting the event.  It's hard to explain how this forward-backward motion is accomplished, but it works to create intense suspense.  Maybe set a timer to remind yourself to breathe occasionally.

While this mother is clearly insane, there are moments when she appears almost sympathetic.  She details the efforts of social workers to instruct her on how to better 'mother' her children, and she resists their advice.  Since it's written in the first person, we get a glimpse at just how irrational she is.  She attributes ill motives to her children, strangers, and even the weather and the sea.  She seems to have no practical skills or common sense:  she finances their trip with a can of coins that turns out to be just a few dollars, although she imagined it to be a windfall.


Her problem, likely some form of bipolar disorder, is presented by her almost constant need for sleep, and her vision is sometimes affected when anything remotely complex appears in her life (such as climbing the stairs to the hotel room).  It's heartbreaking to read of her young sons, hungry and silent, waiting for her to waken, while they sit in their cold and dark hotel room.  The oldest son, Stan, is an especially intuitive child, and there is a sense that he may know what is unfolding.

This would probably be considered a novella, but it's impact is not minimized by its size.  As a character study of the mother, it is flawless in describing an inner struggle with sanity in a world that appears insane on its own.


Special thanks to Mieke Ziervogel of Peirene Press, London for the Review Copy.
Posted by Amy at 12:05 PM