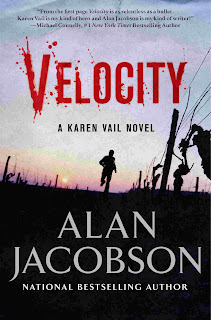 Velocity is the latest in a series that revolves around Karen Vail, an FBI profiler, and in this case she’s in Napa Valley trying to catch a serial killer. Jacobson captures wine country perfectly, with the descriptions of winery operations, the rural countryside, and the personalities of the nouveau riche jumping into the wine industry. He clearly knows the region.  Vail is not a ‘chick’ cop, and fortunately, there are no descriptions of her designer purse or what fashions she may be wearing. She’s a clever detective and works well as a consultant with the jurisdictional police; she doesn’t pull rank or play mind games.

As the story begins, several key events have already taken place. Vail’s boyfriend is missing, a suspect has been shot and is critically injured, and the police are trying to solve a string of murders and abductions. Vail is called away just as things start to look promising. But the search continues and leads across the country and creates a compelling mystery to be solved.

I hated it.  No.  "Hate" is too strong a word.  In fact, I didn't really dislike it either.  I was annoyed by it.  I might have actually liked it a lot if it weren't for some distractions in the narrative.  These made the story very hard to become fully involved in, despite the clever plot twists.

“Got a laptop,” Vail said. “It’s unplugged.” As Dixon joined her, she lifted the lid. The screen remained black. “Looks like it’s off.”  Brilliant deduction!

This happens more than once. “She plucked the disc from the plastic spindle, then placed the DVD in the laptop tray and watched as Windows Media Player loaded.” Seriously, I am too wordy, I know it. But I’m also not a published author! Why does the reader have to plod through all that detail? A page later we read that “Windows Media Player closed.” Hardly exciting, and it detracted from the pace. Additionally, maybe because my mind was already distracted, there seemed to be a lot of product placement-the brand name of just about everything was noted. Instead of making it more true-to-life, it felt like filler.  It occurred to me that fifty years from now-when a reader wouldn't care about a Blackberry-that the book would either feel dated or campy.

The most annoying thing of all, however, was the inclusion of two rather boring characters: “the SIG” and “the Glock”. Vail and her partner Dixon carry guns, no surprise. But every time they enter a building, chase a suspect, or sit in their car, we are told the status of their gun. In virtually any scene Dixon appears in, we are told “her SIG drawn” or “SIG in hand”. Vail's Glock is similarly noted.  Having read other detective stories and seen countless episodes of Law & Order, I don’t think I need to be told that as they chase a suspected killer that they’ll have their guns out. It’s a given. And in this novel, it becomes a huge distraction. Maybe if I had read the previous books in the series I would know the characters better and not be inclined to notice these things.  I do think if someone was familiar with the character of Karen Vail, they’d be pleased with this newest novel.


Thanks to Julie Harabedian and FSB Associates for the Review Copy.
Posted by Amy at 12:05 AM