How to Read the Air by Dinaw Mengestu

How to Read the Air is the latest book from Dinaw Mengestu, and it's one that manages to explore the subtle differences between what we believe and what may be true.

Briefly, it is the story of a man named Jonas, who attempts to reconstruct his parents first years in the US when they emigrated from Ethiopia. Their marriage was fractured and strange, and in the wake of his own disastrous marriage, he hopes to find answers to his personal identity by going back to his parent’s lives. He believes that by better understanding them, he can make sense of his own awkwardness. He describes his youth: 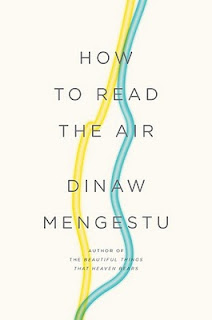 “I had always suspected that at some early point in my life, while still living with my parents and their daily battles, I had gone numb as a tactical strategy, perhaps at exactly that moment when we’re supposed to be waking up to the world and stepping into our own.”

However, rather than being a straightforward story of nostalgia, Mengestu deepens the narrative by showing, immediately, that Jonas is not exactly truthful. He works for an agency that helps new immigrants acquire legal citizenship in the US, and he’s known for his smudging the lines of truth to create more sympathetic experiences for his clients. In other words, he lies, boldly yet with the awareness of remaining credible. Thus, we learn our narrator is unreliable. How much truth will be revealed as he relates the story of his parents and his own marriage? This creates suspense and makes understanding the characters that much more complicated. A reader is forced to examine each statement and weigh it for accuracy, and consider what Jonas may be trying to hide.

First, we learn of his parents. They emigrated separately, his father first with his mother coming a year later. They are two incredibly different personality types: his father is perceptive and quiet, with a gift for noticing his surroundings and an almost sixth-sense for staying out of trouble. His focus on intangible concepts makes him reserved and wise. His mother, on the other hand, is obsessed with the tangible: possessions made her feel safe and contented in Ethiopia, where her status was high. Now in the US, her position in the world has changed, and as a minority with less wealth than she’s used to, she is insecure and angry.

Jonas himself married Angela, another lost soul who finds security in squirreling money away, while occasionally succumbing to a pair of Jimmy Choos for their therapeutic benefit. Angela is the most fascinating character to me, and in one of her conversations, she also reveals what she thinks of ‘telling the truth’:

“There’s no such thing as kind of true. If I told you the whole story, you could say it’s true, but you don’t know the story. […] Everyone thinks they know the whole story because they saw something like it on television or read about it in a magazine. To them it’s all just one story told over and over. Change the dates and the names but it’s the same. Well, that’s not true. It’s not the same story.”

Angela is beyond needy, and her outlet for her insecurities is to control others as much as possible. She pushes Jonas to change every chance she gets. Despite her success as an attorney, her deep unhappiness is revealed in snarky remarks and a mistrust of everyone. Jonas and Angela are doomed by their inability to know truth.  Significantly, Angela is portrayed much like his mother-focused on concrete items she can see and own, while Jonas is more cerebral and aloof.  Does he realize how he has replicated his parent's dynamics?

Plot aside, the prevarication that Jonas is prone to makes reading this that much more interesting. It’s difficult to know what facts to accept or disregard, and he gives himself away at times. For example, at one point he describes his mother playing mind games with his father by making him wait endlessly in the car as they leave for their honeymoon. At one point she pretends to forget something and runs back into the house-she’s having a meltdown. Yet, her meltdown is counted in seconds (her little trick for calming herself), and so she allows herself a little more than 200 seconds to calm herself. Then she returns to the car. A stressed out woman with a meltdown that lasts less than four minutes? Seriously, how is that possibly a bad thing? Or is it that Jonas is letting us know that she isn’t actually as moody as he’s portrayed her?  Could he be admitting that she's just as fearful as Angela, the woman he left?   That would mean his version of both of these women, as controlling and difficult, may not be accurate.  Is Jonas up for the challenge of truly understanding his own story?

As a reader, I enjoyed this overall but a few things bothered me. For one, while delving deep into some explanations, he skims over other details that would have bearing: he never explains why, aside from a shared race, that he and Angela married. And, when he takes a job teaching, why the sudden epiphany about his suddenly fitting into the world? What changed? He had worked before in the public sector-what was it about this new job that flipped his identity over? Lastly, a few sentences were structurally ambiguous, and I had to catch myself and reread them a few times to figure out who he was talking about. A minor thing, but it was enough to trip the pace a bit.


Special thanks to Lydia Hirt of Riverhead Books for the Advanced Review Copy.
Dinaw Mengestu was recently honored in the New Yorker's collection of "40 under 40".
Posted by Amy at 9:21 AM