At first I thought that The Kitchen Shrink was going to be some sort of self-help book on how to find happiness at home, possibly meditating while doing dishes.  I even put off starting it, because I feared it would be full of psychobabble and platitudes like "bloom where you're planted".  I was wrong.  Yet again. 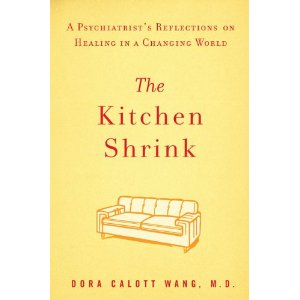 Wang describes herself as "a doctor working in the medical profession as it became the health care industry."  Trained as a psychiatrist, her training involved talk therapy, face to face communication, and a personal connection with patients that were seen over a period of time in order to determine what help would be best for their particular problems.  However, as she admits "all my jobs since my training in 1994 have been to prescribe medication only."  Wang uses this book to explore the processes of what used to be medicine and now could be considered nearly only a pharmaceutical business.  While in the past, doctors would look for alternatives to prescribing medication, now the only question is what kind of medication to supply.  It's basically a matter of time:  talk is expensive, sending a patient off with a prescription is cheap.

She demonstrates, effectively, how the changes in the treatment of patients, due primarily to the influence of insurance companies that act like bullies, has harmed the most fragile of patients:  those with mental problems and who need personal attention and interaction.  According to Wang, "Insurance companies started to call the shots" in medicine, not only suggesting doses but also withholding approval of treatments that might aid the sufferers.  In fact, at times their logic was so flawed that they'd refuse to cover a preventative procedure, which would save the money in the long term.

Wang describes the changes and problems with many anecdotal details that make it a fascinating read, and you can't help but see that medicine in other specialties is also likely to be turned into assembly line health-care, controlled by health insurance companies that not only lack medical degrees but also simple compassion and reasonableness.

One big player in the game that is as insidious as the insurance companies are the pharmaceutical companies.  Wang notes with irony that her fridge is covered with Zoloft magnets, and that she writes on a Paxil notepad.  While recent laws have cracked down on the practice of pharmaceutical companies providing free "goodies" for doctors, such as pens, clocks, scales, and vacations, the influence still remains strong.  Incentives to prescribe their medications, rather than what the patient most needs, is a problem that doctors have to face.  Additionally, with their face time with patients dramatically decreased, and the paperwork authorizing visits and procedures increasing, some doctors are leaving their practices out of frustration.

This book is eye-opening and at times, it makes you mad.  Some cases of poor medical supervision has cost lives for no other reason than greed.  Besides revealing this mess, though, Wang offers concepts to ponder in what your own medical care may be, and helps you see ways to benefit yourself by asking the right questions.  This book would be a great supplement to How Doctors Think by Jerome Groopman, Mariner Books, 2008.


Special thanks to Julie Harabedian of FSB Associates and Riverhead Books for the Review Copy.
Posted by Amy at 12:05 AM