Translated from the Catalan by Laura McGloughlin and Paul Mitchell

“I feel like a stone after a landslide. If someone or something stirs it, I’ll come tumbling down with the others. If nothing comes near, I’ll be here still, for days and days…” 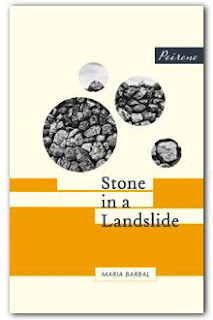 Maria Barbal’s novella, Stone in a Landslide, is unique because it covers so much history in just a few pages. The fictional memoir begins in the Catalan region of Spain, when a young woman, just thirteen, is forced to leave her home because there are too many mouths to feed. The poverty in this time left many with few choices, and so her family sends her to live with a barren aunt and her husband. This quiet little girl, Conxa, leaves quietly, and without much fuss. A personality trait that becomes a description of her life, her quiet acceptance of what befalls her is what makes her story so intriguing.

In first-person, she recounts her adjustment to a new home, where she has to learn to navigate around her controlling aunt and the new chores put upon her. She works extremely hard both in their home as well as in the maintenance of their fields and animals. But this is no Cinderella story, her relatives are not cruel. They come to love her as a daughter, and the skills she learns help her as she becomes a woman with a family of her own. The novel covers the milestones of marriage and motherhood and loss, all against the backdrop of the famine and the violence of the Spanish Civil War.

Despite all she could say, she is actually quiet brief. It’s clear that being forced to leave her home as a child took something from her, possibly her sense of security or belonging. Because throughout the story, though she never directly states it, it’s clear that she felt like a burden, and that she should never speak up or contradict others. She raises her own children with loving attention but a sense of distance, always looking at them through the eyes of possibly losing them. “Perhaps deep down I was afraid of losing what I’d learnt to own.” Her insecurity combined with fear leave her mute in the face of problems, such as the menacing priest that threatens her family’s safety. It’s only when her worst fears are realized that she becomes more aware and invested in her own life.

In the case of the Catalan villagers, their very lives were impacted by decisions and actions far away in Barcelona-so far that even their oppressors didn’t quite know who they were. It would be easy to say these were simple people, but that implies that they were ignorant. These people were intelligent and wise, but their commitment to the land for basic sustenance gave them little time to dwell on the political happenings far from them. When the rebellion came close to home, she realizes that the rural villagers throughout most of Spain were like her, simple people as insignificant as stones found on the Catalonian mountainsides.

“There were those who wanted us not only to suffer but to feel guilty as well. Why do hundreds of stones always fall at once?”

This is a quiet book, filled with thoughts to contemplate. The slow pace of the village life and the tremendous hard work is unimaginable. After I finished the book, I found myself returning to it for the simple prose and the way she can say so much in so few words.


Special thanks to Meike Ziervogel of Peirene Press, London UK for the Review Copy.
Posted by Amy at 2:30 PM