The Blindness of the Heart, Julia Franck

Translated from the German by Anthea Bell

Winner of the German Book Prize

Most novels that explore the events of the Holocaust focus on the ‘Before’ and ‘After’-showing the events chronologically and the resulting impact. However, The Blindness of the Heart takes a reverse approach and begins by revealing a disturbing ‘After’: a young woman abandons her young son at a train station and disappears. We see how they’ve lived in horror for months, but his abandonment is still shocking. Then the author, Julia Franck, takes us back in time to the early years of this young woman, and the events that lead up to a lost little boy, confused, hungry and alone. 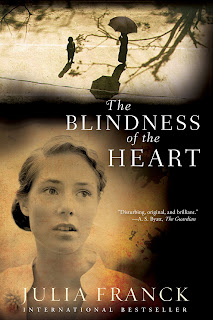 The mother is Helene, and her family is dysfunctional and damaged long before the Holocaust begins. Her identity as a person is in question before her identity as a Jew becomes relevant. As a nurse she helps care for her ailing father while trying to deal with her mentally ill mother. She thinks she finds a future, but nearly everything she is close to is taken away. She finds a way out of the impending doom by marrying a German who helps her with false papers that identify her as Anna, a German citizen, but their marriage yields nothing but the child. She raises him alone while working long hours in the hospital, assisting German doctors in the maternity ward, as well as in the forced sterilization of some female patients. Her son, Peter, is often left alone while she works, and while they remain together it’s clear she’s drifted away long before she leaves him literally.

The book is incredibly painful. A few times I put it down just to get away from the grief. The author makes a tremendous gamble by having her lead character do something that appears unforgiveable right off the bat. She is counting on the reader to ponder the back story and conditions of the woman’s life and see if her decision made sense. She shows how emotionally abandoned Helene had been, and the ugliness that fills her life. The problem is, despite Helene’s previous suffering, it’s very difficult to get over the impact of the first few pages of the book. The result is a tension that carries through the book and makes the narrative so compelling.

One factor I found fascinating was the details of the nurses and their struggles in Germany. The endless shifts, multiple duties, and repellent activities in their wards were well detailed, and a part of Nazi history that I wasn’t aware of. The fact that Helene works with new mothers is a link emotionally with her own insane mother and her own flawed nurturing. What motherhood means is an underlying theme, and the title makes you consider what kind of love is blind.

Additionally, Franck creates an unforgettably tense scene in which the hungry mother and son go mushroom hunting, and find themselves in flight to escape hunters that are not after animal prey. As she runs frantically, she appears to be hallucinating as she considers her escape route, Peter’s whereabouts, and the various ingredients for different recipes to cook, all spinning through her head at once. Her actions in the forest foreshadow what is to come.

In a few places I found Helene/Anna’s character to be incredibly cold. I understand that under her circumstances, self-preservation required her to withdraw emotionally. And very few aspects of her life were really under her control. Yet there was an element of simple kindness she seemed to lack, or perhaps, it was all used up.  In any case, the glimpse we get of Peter's future shows how the cycle of pain is completed.


Special thanks to Martin Wilson of Grove/Atlantic for the Review Copy.
Posted by Amy at 1:22 PM