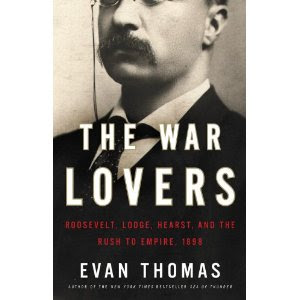 The War Lovers:  Roosevelt, Lodge, Hearst, and the Rush to Empire, 1898 by Evan Thomas is beyond fascinating...it's downright scary.  It is an extremely detailed telling of the events of Theodore Roosevelt's presidency and the Spanish-American War over Cuba.

It begins with the subject of Roosevelt himself, from his habits to friends to family life.  His tough guy persona that needed women to soothe him, and his blistering desire to fight.  Any fight.  He was closely allied with Henry Cabot Lodge, a somewhat snobbish and whiny man that helped him frame his Presidential plans.  Roosevelt wanted war, often considering if he could find an excuse to invade Mexico or Canada, and disappointed when one wasn't found.  Cuba had been on his mind for some time before it became a realistic possibility.

Aiding Roosevelt, albeit unintentionally, was William Randolph Hearst, a genuine oddball who also wanted to see America fight (and gain) Cuba.  His motives were more obscure:  he wanted to sell more papers, and called his skill "the journalism that acts".  War would help him make money and gain influence, influence he was eager to use in his political circles.  At one point, even though no real threat from Cuba existed, he pondered ways to agitate Cuba.  He had Tiffany's make a sword and engrave it with "Viva Cuba Libre", scheming that delivering the sword to Maximo Gomez would get a reporter inside for an exclusive scoop.  This failed, and he later hired reporters Richard Harding Davis and Frederic Remington (the Remington) to go to Cuba as 'envoys'.  Remington grew bored with the lack of excitement in Cuba, and sent Hearst a telegram stating he wished to return.

Hearst responded with the now famous line "Please remain.  You furnish the pictures, and I'll furnish the war."  Time passed and the explosion of the USS Maine in Havana harbor set in motion the path of war that Hearst and Roosevelt both eagerly anticipated.  While the cause of the explosion was disputed even then, the facts were irrelevant.  They had their war.

The book is amazingly researched and detailed, and illuminates many personality quirks that I'd missed in other readings of the time period.  Thomas doesn't simply portray these men as hate-mongering bullies, but softens it a bit to tell us why they were driven to that end.  He portrays both the cultural and political events of the era in a fast paced and almost gossipy read.

What makes it frightening is to recognize the parallels of then and now.  Strong personalities, the advantages of wealth and power, and a quick-to-exploit media all are featured in our daily lives.  In fact, many of the techniques and manipulations of the press that Hearst used are standard playbook policies now.  When I first started reading this I thought, 'how could this be true?'  Having completed it, I can say it is too true to ignore.  We still have out-of-touch politicians who care little for the soldiers that fight for them, and huge media moguls still dominate the way we get information.  This book is an excellent way to evaluate what we see now, in view of the past.


Special thanks to Kelly Leonard of Little, Brown for the Advanced Reader's Copy.
Posted by Amy at 4:57 PM