To say that this compilation is a lovely and simple collection would be false.  "Simple" could be taken to mean childlike, or unsophisticated, which it most certainly isn't.  By simple I mean that the poetry is understandable and personal, not so cluttered and overly nuanced that it becomes incapable of eliciting emotion.

Emotion abounds in this collection, which is divided into three parts:  Incantation, Transformation and Song.  Each section has its own beauty, and there is a delicate feel that at times becomes jagged and pointed, enough to make you sit up and re-read the stanza.  This is not a poetry book to sit back and feel relaxed by, but rather one to slowly meditate upon.

The people drawn within it are complicated:  in one moment trying to determine if a noise is simply thunder or an airstrike, while choosing what breakfast cereal to eat.  They carefully choose a lipstick for a dance that may be their last.  They discuss their travels with a dying parent whose only journey is from hospital bed to bath.  They are painful and yet some are light and airy.

One of my favorites:  from Song,
"You Might Consider"

how my long life of losing men
could create a new international sport.

Men lost in the desert, men missing
in action from doorways and all night diners;

men making the most of fire
escapes, service stairs, the emergency aisle

of airplanes like United.  Men
para-sailing after spaceship encounters.

as his pick up truck disappears
traveling on to the next espresso stand.

Something in the curve of my collar,
the cut of my blouse sets them running.

They know they are in the hands of a master.
But when the coffee's on, the pumpernickel

In "Transcendence", she uses the musical phrase,
"plastic curtains ecstatic as castanets."  Words like that are mesmerizing, and I kept finding segments equally unique and beautiful, compiling an instant mental picture. 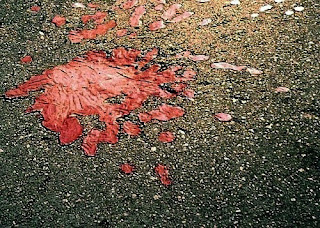 In some of the poems she discusses the genocide in Srebrenica, and at times she refers to a 'Sarajevo Rose'.  I had to look that up, and I've included a picture (above).  A Sarajevo Rose is the location of a mortal shell attack that killed some one, some person, some individual that meant more than just a mark on the pavement.  The damaged area is then filled with red wax, as a rememberance.  That strange mix of memory and horror with a tiny dash of shocking color is what too many have lived through, and in a lyrical way Rich manages to link her poems with that same emotional impact.
Posted by Amy at 10:22 PM