Easy as Pi:  The Countless Ways We Use Numbers Every Day
by Jamie Buchan
Give me the 411.
187-I got him at gunpoint
Deep six it.
Fahrenheit 451
The Seven Samurai
It would be completely cliche to say numbers are everywhere. So I wasn't terribly sure I needed to read this book, as unless you are talking about large numbers of cash migrating into my bank account, the subject seems only nominally interesting.  However, having greatly enjoyed another book in the series, A Certain "Je Ne Sais Quoi" by Chloe Rhodes, I had to see what this one was about.  It's intriguing on so many levels...

It's not about numerology or anything other than the origins of certain pop culture numbers and numerical phrases, decidedly low brow and accessible.  "Hawaii Five-O", "Se7en", "Three Sheets to the Wind" sort of words and phrases...things you don't expect to find interesting, much less fascinating. 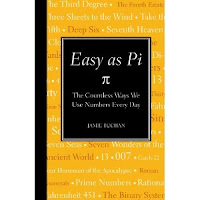 The book is divided into five sections:  Numbers in Language, in Fiction, in Culture, in Math and Science, and in Mythology and Religion.

Example:  Why did Ray Bradbury name his iconic novel Fahrenheit 451?  Likely because that's the temperature at which paper incinerates (his story involves book burning).  Or what significance was the number 77 in Sweden in WWII?  The pronounciation was so difficult to pronounce, even to a native speaker, that guards at borders used it as a password to distinguish between native Swedes and those trying to cross.

Written in a dictionary style within the categories, it's suitable for general reading and for reference purposes.  The writer's style reminds me of A.J. Jacobs or Eric Weiner: fast paced and witty.


Special thanks to Julie Harabedian at FSB Associates for the Advanced Review Copy.
Posted by Amy at 6:47 PM