Robert Belenky is a clinical child psychologist who has chosen to spend his time working to study the dynamics of children who are abandoned or removed from their homes, in order to learn the best ways to help them grow to successful adults. With years of success in the US, he branched out to make voluntary trips to Haiti and Russia to observe the children in their temporary homes and determine how to more effectively design a shelter program. In Tales of Priut Almus, he relates 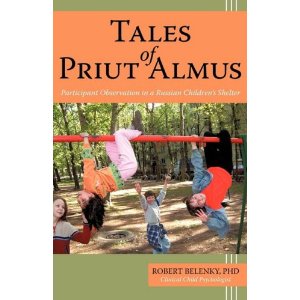 “It is a chronic condition of unfulfilled needs; of children huddled under railway station platforms, of orphans abandoned to fate, of victimization by way, disease, and abuse, of derelicts, scroungers, vagabonds, thieves, and crooks who inspire only revulsion in our hearts.”


Thus, he travels to Russia to stay in Priut Almus, a shelter for these “surplus children”, the majority of whom have lost their family structure due to alcoholism. The priut (which means shelter) houses a coed group of children in ages ranging from 3 to 17. The facility features combined sleeping rooms, an in-house medical facility, cooking facilities, and a large community room for eating and tasks. “Vospitatilnitsa” are the caregivers that keep order among the children. Chores are assigned for each child, and an informal ‘government’of children meets to discuss various decisions in the prius.

In this prius, the children are part of the community, attending school along with neighborhood kids, and are allowed to leave the prius on errands and field trips. However, the children are only allowed to stay in an almus like this for one year, after which they must leave and return home, transfer, or be lost to the streets.

Living in the prius as he does his research, Belenky is immersed in the schedule and the children bond instantly with him. Taking comprehensive notes on their behavior and interactions, he compiles what he feels are strengths and weaknesses to the facility design. His immediate concerns relate to the variance in ages and the mix of sexes, particularly of teenagers within the prius. On his visit though, all seems to be appropriate, and he notes a particular tenderness and instinct for protection that the older children feel for the younger.

Strengths of the prius include the healthy meals, structured schedules, and loving caregivers that, despite being grossly underpaid, attempt to provide stability and a measure of permanence. Included in Tales of Priut Almus are black and white photographs of many of the children: heartbreaking faces that display innocence and hope even in their tired eyes. To start this book, one should examine the photos first, as they make the connection to his observations more personal.

An absorbing read, I did find a few distractions. One was a large number of typos that should have been caught on an editorial level. These were especially noticeable in the second portion of the book but rare in the first half. I’m not sure how that came about, but it gave an amateur feel to the book despite the high credentials of its author. Given his devotion to this cause, making a number of trips over ten years at his expense, I can’t help but wish his information was presented better.  At other times, his commentary rambled and seemed repetitive, with small details that weren't always necessary.

The other thing that bugged me was a particular word choice he used. He describes the emotional needs of the children as well as the physical needs. “…not touching a needy child is also a form of child abuse. Children such as those who live in Almus must be touched-their hair must be brushed, they must be allowed to sit on one’s lap and they must be embraced as the occasion warrants, with honesty, warmth, safety, and sensuality.” I was agreeing with him until he arrived at “sensuality”. He repeats it and tries to clarify that he doesn’t mean sexuality, but I can’t find a synonym for sensual that doesn’t imply gratification on a sexual level. I understand what he’s trying to get across, but again, I think on an editorial level this word could have been removed and replaced with a more neutral choice. As it was, his phrasing sort of haunted me throughout the rest of the book and made me realize just how vulnerable children in this situation would be.

Belensky clearly knows how to advocate for children, and his insights into the structure and how it works successfully is a valuable tool in assessing other shelters and systems.  Not jumping in to change or alter the system, but rather neutrally observing makes both the children and staff comfortable in airing their concerns.


Thanks to Kevin Gray of IUniverse for the Review Copy.
Posted by Amy at 1:43 PM