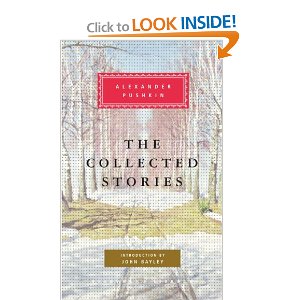 Pushkin is pretty much synonymous with Russian prose, and in the past I can only remember reading a short story or two.  This collection contains most of his famous short stories as well as a few unfinished tales.  While they were written in the early 1800's, the stories are timeless and reflect quite a knowledge of human nature.  "The Blizzard" and "The Postmaster" were both favorites of mine..."The Undertaker" was also amusing.  The subject matter seems to revolve around the either very wealthy or very poor in Russia, with detailed descriptions of high society in the times.  Russia hadn't yet seen many of the tragedies that would later occur, so the stories are not heavily involved in military accounts or political issues.  Instead, very simple stories about ordinary people fill the volume.

This would be a great introduction to Russian literature, especially in that the short stories are not as much of a committment as War and Peace or Anna Karenina.  He's very concise as well, and the short stories pack a punch.

Equally interesting is reading a brief biography of Pushkin...he was quite the ladies man!  That is, until he decided he wanted to seek and marry the most beautiful woman in Russia.  He found her, and pursued her, and after many years, ended up dying in a duel over her honor in 1837.


Special thanks to Lisa Hayden for the gift of the book!  I wasn't able to find the exact copy online, so the photo is from a very similar collection.
Posted by Amy at 2:50 PM