Everyone knows the television is going downhill fast, right? Surely we can look at this week’s episode of Jersey Shore (please don’t make me!) that set a record for MTV viewership and know that quality isn’t exactly easily found in television programming today. So, should we get nostalgic and remember the old days of TV, where we imagine it was more beneficial and innocent back when the family crowded around the massive console? 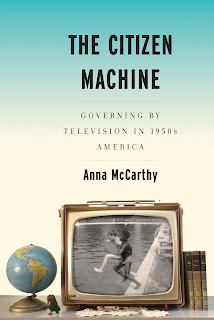 Or, consider how worked-up parents get when their children’s television show/babysitter is interrupted with commercials selling cheap toys and junk food. Haven’t you heard many parents reminisce about a time when a television show was simple and enjoyable and didn’t come with all sorts of corporate or merchandise tie-ins?

Wasn’t it the Goo Goo Dolls who said, “Reruns all become our history.” What if that history was wrong?

If I sound snarky, I am….this week I’m focusing on television. First, I got really rattled with the book Citizen Machine by Anna McCarthy (next week I’ll post about The Mind Snatchers). I’d been led by tradition and assumption to believe that the early days of television were more noble and family-oriented.  But this book relates that instead, it was simply a tool to manipulate viewers, much like a McDonald’s commercial that interrupts The Penguins of Madagascar. In fact, the way television was used as a means of advertising was actually worse, in that the content was designed around a specific agenda without a clear delineation of where the show ended and the commercial began. In this case, it was government and corporate policies that were subconsciously projected into the mindset (and television set) of the viewer, clearly designed to manipulate their viewpoint on everything from civil rights to labor unions.

As a means of delivering propaganda, the television was perfect. The novelty of its invention made people clamor to view it, with little thought to who and what was behind the productions they watched. Citizen Machine analyzes several examples, and I’m only going to touch on a few. Remember years ago when Chevron ran those ads about how they were placing (dumping) old pipeline into the ocean to create new habitats for fish? Who doesn’t love an aquarium, right? Those kinds of commercials are considered institutional advertising: a ploy to convince you that this big business isn’t just out for a profit but to help the world. In the early years, DuPont was one of the biggest forces in institutional advertising, needing to soften their image in a time that society was suspicious of large corporations.

In DuPont’s case, their image was especially tainted. Known for making a killing selling gunpowder and poison gas during WWI, it was discovered afterwards that they had defrauded the government despite huge profits. The DuPont family "were vocal supporters of the United States’ entry into World War I, although only one of them…would see combat”. They needed to boost their image, and began so with a radio program called The Cavalcade of America. Later, that turned into a television series of the same name. Along with GE, they created “anthology dramas” that appeared, on the surface, as a means of delivering classy content to its audience, but that constantly reminded the viewers that DuPont was providing it to them, “appearing as a civic entity donating cultural goods to viewers and asking only for their goodwill.”


Besides the programming itself, they inserted their slogan “Better things, for better living, through chemistry”. McCarthy then connects how, by aligning their corporate image with science, it added a level of superiority and legitimacy. Anything, in their case, to distract from their business image as a vicious monopoly. They also used the programming to perpetuate the power of the white, successful businessman and his loving nuclear family.

About that white businessman… DuPont did air an episode on their Cavalcade Theater called “Toward Tomorrow”, one that presented an inspirational tale of the rise of the successful black man and Nobel Prize winner, Dr. Ralph Bunche. Some viewers were shocked, while others were supportive. McCarthy quotes a letter from one viewer who makes sure she identifies her own race as white and who “requested that television ‘give us more all colored folks performances. It would be a good rebuttal for the crime they (those folks from that town in Miss) commit against us the white race’”. While this viewer was referring to a recent news event, her attitude towards blacks in general is implicit.

From this episode, one would imagine that DuPont scored a victory for blacks and civil rights too, as well as appearing culturally evolved. Actually, it fell flat. The majority of blacks who saw the episode thought it pandering and condescending (it was). They also quickly made the connection that while DuPont had promoted this episode, “company hiring policies did not reflect the image of social responsibility and racial outreach…” In fact, DuPont was actually investing in the South in order to save money on workers who demanded higher wages in the North, even contributing money to political organizations who opposed desegregation.

As seasoned viewers today, can it be said we would be able to catch on to such manipulation? It’s difficult to be sure, when corporations now spend millions on analysts and research experts who try and pull the strings to both our wallet and our emotions with their subtle techniques. McCarthy gives some insight to this in her Epilogue (which should have been its own chapter) where she ties together the modern trend of television experts who counsel viewers on self-improvement but only in one perceived direction.

McCarthy discusses reality television programming as well, but fortunately, her time on that is brief. There’s enough information in the media currently that dissects the trend without her needing to analyze it further. The strength of this book is seeing just how powerful corporations and organizations were and contemplate what and how things have changed, if at all. It’s then a short step to connect the concept to the early years of any new innovation. Well-researched and full of anecdotal details (she even researches the marginalia of notes taken in corporation meetings), it is full of information that gets a bit overwhelming at times. Part of me wished the chapters had been a bit shorter (there are only five) to be able to compartmentalize the massive amounts of information easier. In any case, the material is applicable to any reader, and would be an especially useful asset in a semiotics study on a high-school or college level.


Special thanks to Anne Sullivan and Melissa Nguyen of The New Press for the Review Copy.
Posted by Amy at 8:11 PM