“Duly noted: the official exhortation to pursue one’s own happiness or be put to the task of generating happiness for others, or worse-to be not in the picture.”


Meeks is the first dystopian novel that I’ve ever read, and I’m glad I started the genre with an exceptionally good title. For in this imaginary world (if indeed it is imaginary rather than futuristic), nothing is as it seems. The complexities of life are narrowed down to the need for a good pale suit to woo in, and an appetite for lovely and varied cakes. 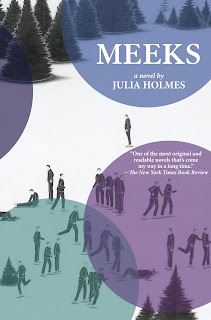 Two main characters alternate in the novel: Ben and Meeks. Ben is desperate to find a pale suit, because that’s what all the suitable bachelors wear in the city park, flirting with women and insuring their actual health and future by finding a wife. You see, there’s a deadline...an unmarried man is either forced to become a civil servant (who can only wear gray smocks) or be killed. This desire to be married doesn’t appear to have anything to do with romance, instead it’s just a means to continue living and enjoying the sweets that the ladies provide in abundance. That, and the ability to wear lovely seasonal sweaters in pale colors (all the happy married men wear them prominently). But all Ben has is a cheap black suit, and despite his efforts, he can’t get a pale one. He resides temporarily in a home for bachelors, where suitable “manly” hobbies are assigned to the residents. His fear is tenable: “what if he was becoming, or had become, an unlovable man? What if the toxin of failure was already coursing through his veins, what if he was already stinking of defeat?"


The character of Meeks is a bit more complicated. He really doesn’t know who he is, and his namesake, Captain Meeks, is rather ambiguous. The city park boasts a statue of Captain Meeks, and his poster appears in certain city buildings. Is he a hero? Or is there an alternative reason? Our character Meeks appears to be something of a bum, one who insists that he’s helping the police in different investigations. Is he, or not? I don’t want to reveal spoilers, so I must word all of this carefully. Suffice to say, no character is typical. Are his police buddies sincere?

The environment around these characters is bizarre: the city park is home to most every function, and there’s little talk of life outside the park, or work, or even family activities. Women are rarely mentioned in terms of romance, only as mothers (who seem to only bear sons) or as dainty little things who pack luscious picnics for their chosen man. And then there’s the mints…it seems the citizens are all overly fond of the tiny foul-tasting mints made right there in town in less than appealing factories. Between candy and cakes, little else of nutrition is mentioned. In fact, throughout the book, it even appears that the only real places of color appear in the park-other locations tend to be dark, gray, and gritty.

So what’s it all about? Reading this with a mind to a review was difficult-I was trying too hard to find meaning. I tried another tack, to just enjoy the novelty, and that made the difference. You have to let go of the need for explanation and symmetry to fall into the story. That isn’t to say there are no undercurrents of meaning: at times I wondered if the mints were actually a commentary on the pharmaceutical industry that numbs people into stagnation. Then again, the focus on fluffy frostings and sweets, rather than the fruits that Ben craved, could be an illustration of society’s dependence on immediate pleasure and sensual appetites over moral fortitude. Even without a deeper meaning, the story holds your attention and the writing is original and crisp.


Special thanks to Jedediah Berry of Small Beer Press for the Review Copy.
Posted by Amy at 8:14 PM