"Taking on the role of animating but anonymous power that revitalized Buster Keaton as his eyes grew sadder and (I thought) more disillusioned, or pumping up a flimsy, short haired Myrna Loy revealed an odd kind of romance I sometimes had with these images.  Or maybe it was a case of antiromance, the romance of solitary, imaginary pleasures."

"Yet when I watched movies and cartoons made before 1939 I couldn't help but pretend to inhabit those faces known only through photographs, wondering if they had watched these too, and in that projection back, the ghostly clusters took on a mixture of strange and familiar features." 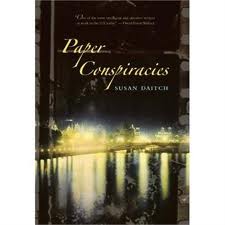 The magic and mystery of the film industry, and the restoration of old and damaged reels is the setting for this novel that examines both current attitudes and historical events with the same intense focus on what is hidden and what is revealed.  Intentions to divert, distract, and conceal are all a part of the discoveries Frances makes as she tries to recover films from the past.

Her own sense of romance about her job alters as she realizes, through her boss, that substantial historical secrets could be literally under her fingers.  Set on preserving and discovering the truth, she learns about the infamous Dreyfus Affair, a French scandal that involved anti-semitism, the Catholic Church, politics, the monarchy, and even the writer Emile Zola.  The connection between this still-bitter historical event and the novel is what the novel investigates as the films of George Melies.

The damaged film may hold the key to incriminating details to the Dreyfus case, and Frances finds that her life is changed as she tries to sort out clues from what appears to be distractions set to throw off the search for the truth. Old letters, vengeful agents, and Frances' bulldog personality all make the search for the riddle's answers that much more difficult.

Everything about this book revolves around the mystery of film and using that as a motif, Daitch manages to reveal her characters in a light that makes us wonder if we are seeing them as they are or as another shadowy transparency. While the book is extensive in scope, the writing is sharp and lean.  It doesn't linger too long on any one facet, even at times when I wish it had.  There's so much going on, politically and historically, that I found myself checking Google often to try and piece together my own take on what was fact and what was fiction.

"...Fabien saw special effects as links that created logical connections between otherwise entirely disparate events or objects....While he searched for props, he created or participated in another event, a parallel set of circumstances and phenomena..."

There's probably an obvious, underlying intention for the reader to question what they see and the forces behind whatever images they are presented with.  While this focuses backwards, there's an instinctive sense of acknowledgement that makes us realize the Dreyfus Affair is being repeated under other names and in other media right in front of us.