The Life of an Unknown Man by Andrei Makine (French translation)

Translated from the French by Geoffrey Strachan


“He pours himself another whiskey, downs it with the grimace of one who has seen through the universal grubbiness of human nature, but, at the same time, with a writer’s reflex, observes himself and finds his own posture false and exaggerated.” 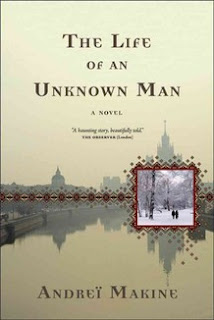 Andrei Makine’s novel begins by summoning the works of Chekhov in the narrator’s consciousness, a Russian voice that toys with his thoughts as he analyzes his doomed relationship with Lea, a woman thirty years younger who has decided to leave him. Chekhov becomes the touchstone that Shutov, our protagonist, keeps returning to, as both emblematic of his own career as a writer but also as a way of remembering Russia. Yet, he’s not necessarily a fan…the Russia he remembers, while now in Paris, is far more brutal than a toboggan ride with a girl named Nadenka.

The end of his relationship leaves him hungering for change, a return to something familiar, so he immediately books a trip to St. Petersburg, in order to reunite with an old lover there. Romantic in theory, but implausible once he arrives. Everything he’s known has changed, and it seems as if Shutov can only look outward at the momentous shifts. For one thing, what he remembers was Leningrad, the Siege, and the hunger of the Russian people just to survive. Now in St. Petersburg, excess is everywhere, and the conspicuous consumption and materialism of New Russia shocks him:

“This is the kind of apartment, the type of food, which in the Soviet era the Russians used to picture when they spoke of the West…And here it is, they have re-created a quintessence of the West that he himself never really experienced in the West at all. A paradox….”

His visit is unfortunately timed during the tercentenary celebrations, with heads of state from all over the world in attendance and with carnivals, parades, and general wildness taking over St. Petersburg. Rather than celebrating, he sees the crowds as chloroformed and participating in a mass “exorcism”. It’s in this position that the novel’s central question is exposed: is it better to celebrate a time wherein Chekhov wrote of rides in the snow and romantic pursuits, or to focus on the horror of the Gulag and the survival of the Russian people to overcome? Or, to leave both behind without a glance and focus on only what is new? It seems that Shutov is lost between these three time periods and can’t find one that fits.

Much of the story line involves writing and publishing, and Shutov questions how these relate to modern history:

“Wisdom after the event...in the old days a collection of poems could change your life, but a single poem could also cost the life of its author. Lines of verse carried the weight of long sentences north of the Arctic Circle where so many poets died…


He imagines Vlad’s mocking reply: ‘And you think that was good?’ There it is. A naïve question like this is hard to counter. Why should the Gulag be a criterion of good literature? And suffering a measure of authenticity?....To these young Russians no book is forbidden now. They travel the world, they are well fed, well educated, free of complexes…And yet they lack something.”


Were it only his dilemma of place, the novel would probably get dull quickly. In fact, at times he does seem awfully bleak. But Makine adjusts the flow by bringing in another story, one that ties the three ages of Russian life that Shutov can’t abide into one narrative, shifting us into the story of an elderly man soon to go into a rest home that has been on the periphery of the story since its beginning. Finally (one thinks), the old man Volsky begins to tell another story, a love story of sorts, of his own with a young woman named Mila just before the Siege began. This is the story that connects all the dots that Shutov has been marking, while still leaving ambiguities for the reader to figure out.

Makine’s novel isn’t just about the state of Russia now, but looks at the position of relationships over time, and at the nature of age, in a similar three-stage layout. For example, Lea and Vlad are both youthful counterpoints to his middle-age, while Volsky stands in as the third age. Each action of these characters corresponds in many ways to the historical ages he presents for Russia. There are even levels to relationships by location: street views, balcony views, and within the innermost apartment homes and hotels that Yana owns. It’s no coincidence that Shutov begins the novel living in an attic in Paris with Lea, only to find himself in a spacious apartment in St. Petersburg and then back to his ‘dovecote’ in Paris. The changes he is slowly acknowledging fall into the same path as these locations.

The novel is lovely and atmospheric, but at times, the character of Shutov becomes more curmudgeonly than is appealing. He’s so dismissive of any changes, even positive ones, that his point of view becomes tiresome. It comes as a relief when Volsky begins his story within the story. When Shutov reappears, it’s with a more empathetic understanding of the very changes he was fighting against. The weightiness of the subject matter makes for serious reflection on change on other levels too: familial, political, and cultural.


Special thanks to Graywolf Press for the Advance Review Copy.
This title released yesterday.