Calvin Moretti is a jerk.  Despite being in his twenties, he behaves like a teenager, collecting vintage vinyl and sinking further into debt.  While he wants to be a man of the world, he ends up moving back home with his parents.  In fact, every decision he makes, or drifts into, leads him backwards.

The timing home is difficult; his overachieving and obnoxious brother is also home for an indefinite time, and his little sister has rejoined the nest.  It all seems to be coming together for a Hallmark moment when the reader learns that the father of these children is dying of cancer.  All those kids, all that potential help!  Caregiving and getting to know each other, creating precious memories. 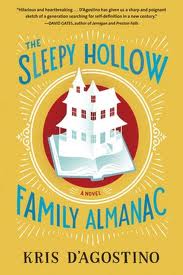 But no.  This is not that family.  Because "Dad" is not a Hallmark moment patient.  He keeps a Colt .45 in his robe.  Shooting at life-size family images through a window at night is just something to do.  He's bunkered down, stocking the house with everything he can to beat a potential enemy, just not the one that is killing him from within.  He makes Calvin promise to be with him in the end, and gives away his fears, it seems, only to Calvin.

An ensemble cast and a family drama like this usually leaves an author plenty of room to make it all work out with lots of hints at impending unity.  That despite it all, they'll end up closer and wiser.

But no.  This is not that author.  Kris D'Agostino doesn't take the shortcuts.  He creates characters that are messed up, and that much more real for their flaws.  Recognizing that challenges don't always bring out the best in us, he doesn't insult the reader by tidying up their sometimes ugly lives.  For example, Calvin works with disadvantaged and disabled children.  Perfect setup to make him a sympathetic character, but D'Agostino doesn't go there.  Calvin is just as much a jerk at work, impatient with these kids, and we see just how atypical he is. And here's the thing: the more layers of flaws and complications put on each character don't just make them difficult, it actually draws us in.

So how can you work a plot around some extraordinarily complicated characters?  D'Agostino does so by making everything a surprise.  A push and pull comes from moments when Calvin looks towards the future:

"In what context?" David asks.

"In the context of life," I say. "A year from now I'll be twenty-five. My father got married when he was twenty-five. He bought a house. I have nothing to show for it."

Yet pages later, Calvin is still short-sighted as always, looking for the perfect drug to deaden such questions about life.  These moments occur for the rest of the family, as their worry over their Dad and money and a new complication presents itself.  Many twists keep the tension ratcheted up, and it's difficult to put it down once you've started.  Possibly because, while most families like to imagine they are the Cosby's, the Walton's, or the Cleaver's, the reality is that they are the Simpson's.  And the Simpson's are what most of us understand.

Special thanks to Megan Fishmann for the Advance Review Copy.