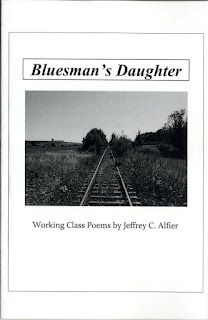 Normally, when I read a chapbook of poetry, especially one whose author I’ve read before, I jump around a bit in my exploration. I may read one or two poems, then put the whole thing in my tote until I get a chance to read a few more. Seldom in order. And that’s what I did with Jeffrey Alfier’s new chapbook “Bluesman’s Daughter” from Kindred Spirits Press. I dog-eared the pages that spoke to me, the verses especially poignant. But the night before I worked on the review, I did something entirely different.


It was a moonlit night; I couldn’t sleep, so I ended up again reading, but this time cover to cover. My perceptions changed-some becoming sharper-while other elements seemed to infuse the whole with a theme I had missed on my hit and miss reading previous.

Alfier is known for sparing prose, concise writing, and intensely visual descriptions. This doesn’t change in Bluesman’s Daughter. But something about this collection feels more historical and more personal. True, we can guess that he’s the Bluesman, and we know he has a daughter he cares deeply about. But it’s even more personal than that.

In “My Father and the Laws of Coal”, Alfier describes a coal man slowly converting to the use of hardwoods for warmth. Hardwood left less dust, less painful shoulders. And nothing much changed in the end as the house was still warmed either way. But the point isn’t the conversion of fuels but the change in mindsets, a sadness almost that the past is no longer relevant, and that by its easy replacement, becomes forgettable. Suddenly we sense that this isn’t about fuel and warmth at all.

“Before the Redeployment” features a father trying to convince his daughter to avoid another return to wartime battle. He can’t imagine her in harm’s way, no matter how much he respects her strength. Yet, there’s a point where fathers can’t control or dissuade their daughters, and the father here understands, “I’m still learning to trust the shadows you want.”

He creates a startling character portrait in “The High School Cafeteria Lady”, a woman who “breaks up fights quicker than coaches.” Her exterior is tough, but she goes beyond the ordinary to be the one that “teaches kids at lunchtime the difference between stocks and bonds, and if the scales of justice have to balance your checkbook you’ve gone too far.” This life teacher will probably be remembered by students more than the hip science teacher or the cynical English professor. Instead, she’ll be remembered as the hard-ass with a heart for Chesterfields.

The whole collection puts improbable characters and situations together and each feel like a glimpse of reality. Certain phrases just knock you out: “Fresh blue paint applied to a clapboard house warns that hope is something recycled here.” Yeah, it’s that good. Then there’s this description, “Her skin was the paper men signed confessions on”. Visual, concrete, and real.


Special thanks to Kindred Spirits Press for this review copy.