Translated from the French by Sheila Fischman 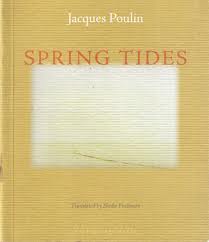 Supporting the translator, to every means possible, seems to be the theme of this unsettling and comic book from Jacques Poulin. The story told is held up by the elements of myth and fable that make the island setting and bizarre visitors seem to impart a greater meaning than had they been placed anywhere else. Translator (Teddy) seems to be the focus, there’s also a Prince, an Author, the Boss, the Organizer, a Professor, a ghastly woman called Featherhead, and an Ordinary Man who come to share the small island with a princess named Marie and a family of cats. Of course, the Author is a grump.

Teddy arrives first, and his work as a comic book translator appears top-secret as his boss frequently flies in to check on him and his work, while also delivering, via helicopter, any possible item that Teddy might find helpful (which is how Marie arrived). Teddy works and swims, and focuses on the tides that isolate the island but also seem to keep it, while stationary, in fluid motion.

Interactions between characters are what propel the events, more so than the arc of a plot. Each character reveals something completely different to what we’ve understood about Teddy. So as they arrive, he appears to unravel a bit, both in our perception and in his literal mental health.

Reading this felt relaxing and amusing. The little digs at publishing, especially the character of the Author, felt spot-on. But something about this made me feel I was missing a bigger picture. Almost as if it might have been even more tragic-comic had I known what the joke was. Because that’s what I felt, as if I only had heard the punch line and was missing the setup of an “in” joke between the author and the story. What am I missing? I tried to find some literary link to another island with similar characters and all I could get was Gilligan (and don’t worry, this is not Gilligan’s Island).

Despite that, I did enjoy the word play, especially the behind the scenes nature of translation and why Teddy chose particular words over others, and his explanations for doing so.


While I review for Algonquin, this was acquired as purchase I made two years ago.
Posted by Amy at 12:05 AM