Stein and Hemingway by Lyle Larsen (all the juicy bits...)

The Story of a Turbulent Friendship
First off, who selected the photos for the cover art for this book?  Seriously, it sets the mood immediately:  Gertrude Stein looking mean and shrill and Ernest Hemingway with an amiable Dos Equis half-smile, his cap at a jaunty angle.  Would I have perceived the book differently had she looked a bit more congenial?

In any case, this is a fascinating read full of gossip and name-dropping of just about every major literary figure in the US and UK in the early 20th century.  The book covers more than just the friendship between Stein and Hemingway, as Eliot, Pound, Fitzgerald and others (Picasso!) are interspersed in the stories. Somehow it surprises me to see just how catty and vindictive many of these authors and poets were, especially that they seemed to focus a great deal on revealing the faults of each other rather than promoting the writing art. 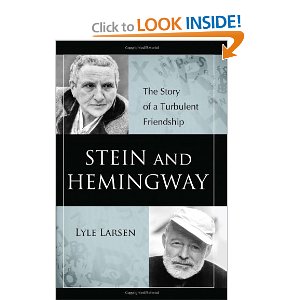 Stein seems to have all the great lines.  In one case, the book explores the numerous times writers came to visit Stein at 27 rue de Fleurus.  One night, Ezra Pound stopped by. "Gertrude Stein liked him but did not find him amusing.  She said he was a village explainer, excellent if you were a village, but if you were not, not."  Ouch!  Another night T.S. Eliot shows up:  "Eliot and Gertrude Stein had a solemn conversation, mostly about split infinitives and other grammatical solecisms".  Stimulating!  But when Hemingway came to see her, their conversations and subsequent friendship became a random mixture of mutual admiration and dismissive gestures, mind games and begrudged respect.

Stein's opinion of Hemingway thereafter, and her part in his success is revealed in a conversation she had with Sherwood Anderson. As Larsen writes,  "Hemingway had been formed by the two of them, and they were both a little proud and a little ashamed of the work of their minds."

William Carlos Williams got a knock in when he remarked on her endless piles of manuscripts, asking her "are you sure that writing is your metier?....things that children write have seemed to me so Gertrude Steinish in their repetitions." Score WCW.  Naturally, she refused to see him again.

Hemingway, once matured and successful on his own, looked at Stein as lazy and disagreeable. He felt that she theorized more than she actually created.  He was harsh and overly worked up about a new way she wore her hair, closely cropped, "like a Roman emperor".  That her haircut was tied into her sexuality was obvious to Hemingway, and it could that he didn't like this "unambiguous statement of her sexual alignment."  In any case, their friendship was pretty much over.  As he explains, "But I could never make friends again truly, neither in my heart nor in my head. When you cannot make friends any more in your head is the worst."

Another character in this real-life soap opera is Alice Toklas, Stein's companion and to all accounts, a troublemaker eager to separate Stein from her literary peers.  Larsen offers insight into why she may have been so controlling.

It occurred to me that much of the friendship between this pair (as well as the other authors and artists mentioned) was dependent so much on face to face interaction...they made efforts to seek out each other's company, often staying for long periods of time in each other's homes.  Alternatively, they'd write extensive letters documenting their thoughts.  Given our technological excesses, it makes me wonder if modern authors would even interact in such ways today.  Maybe firing off a Facebook post or a Tweet in response to another's work, but does the same 'peer-review' sense of conversation about artistic works still occur?  Has globalization made it easier to come together, so much so that everyone takes it for granted and remains distant?
Posted by Amy at 2:44 PM