A Spy in the Ruins by Christopher Bernard

“In the wreckage of a life contained like a seed in the wreckage of love. Since that is what it is meant to have been all about. Wasn’t it. Was it not. Where is it. The nightmare again. Flung. Out. Far.”


In Christopher Bernard’s novel, A Spy in the Ruins, a disaster has devastated a city. Or perhaps, it only affected a small region, a block, a person, or just a moment. The reader begins by being uncertain as to exactly what happened, and more importantly, why. This vague beginning is intended, and offers the first clue in grasping the scope of this complicated study of the human mind, memory, and hopes. Various characters appear, but one can’t be sure if they are indeed individuals or fragments of one consciousness. 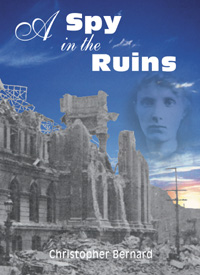 Various literary devices are used in a surprising way: poetry and narrative intermingle throughout. Phrases may appear on a single page, and paragraphs can last for pages. Some paragraphs are absent all almost all punctuation, which creates a sense of propulsion towards the next word, speeding the text into a tense pace that feels urgent. Alternatively, other paragraphs are full of fragments, such as quoted above, driving the reader to stop. Listen. Question.

I have to admit, as I began, I wasn’t sure where the story was headed, or if it even was a story. It doesn’t follow Campbell’s Heroic Journey mythology. And I can’t really say that it is character or plot driven. I continued, because I was intrigued, and began to make marginal notes whenever a concrete location or person appeared…something to anchor the narrative to reality (or at least a fictional one). My marginal notes were minimal. It didn’t take long to figure out that such anchoring wasn’t the point, but rather the emotional and mental state of each action was what Bernard was toying with. With this in mind, it became easier to see that this was a piece of metafiction that was more about exploring the line between reality and constructions.

“It came as something of a surprise to learn that the will was written in invisible ink. So much trickier the task of deciphering a text on a blank and tumultuous page.”


Such deciphering continues as the novel continues, and without being held to the typical story arc, it is free to examine random perceptions about youthful confusion, aged wisdom, and the struggle to conjoin the two. A young man and woman both appear, but separately, and are written so differently one would imagine they were separate species rather than human. Their thoughts are rambling, sometimes incoherent, but also painfully honest. In a typical story, an author would be hard-pressed to have a character speak (or think) so honestly without alienating the reader. Because these are beings we can’t know, their anonymity allows us to view them without judgment.

“One day he opened a book. It was as though an arm rose from the pages and seized him by the throat and a voice angry learned and terribly clear said look hear listen act. Who are you. What do you know. What do you believe. What have you done. What will you do. What will your life have been worth.”


For some reason, that quote from the book reminded me of T.S. Eliot’s reaction to Joyce’s Ulysses, and how Joyce’s authorial voice challenged his way of looking at fiction forevermore. I can’t find the quote now (of course), to confirm it, but I’ve heard similar reactions to Joyce because of the unconventional style he employed. In any case, this novel’s unconventional style is mesmerizing. Throughout, the idea of books as challenges to consciousness and thought prevails. Bernard insists, through the poems and prose, that only books can reach the interior of the mind and the honesty of private contemplation. At the same time, books may invite disorder and dissonance as well.  After all, going back to the title, who is the Spy and what are the Ruins?

“Chaos facing its reflection in a mirror becoming symmetry and order.”


Once the reader can grasp that the intention of the book is to question consciousness (that’s my take…I hope I’m not way off base!) rather than take a reader from point A to B, it begins to read more personally. No doubt, this is a complicated book, one that requires consideration and reflection. If I were to advise a reader, I’d suggest that they read it slowly and enjoy the play on words, the images created that only hint at reality, but that feel familiar.


Special thanks to Regent Press for the Review Copy.
Posted by Amy at 11:14 PM