Adrienne Rich, "Diving Into the Wreck", poem and analysis

To remember Adrienne Rich, who passed away earlier this year, and to commemorate Poetry Month.  A study of the symbols she used in this personal examination... 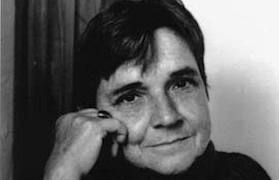 Diving into the Wreck

First having read the book of myths,
and loaded the camera,
and checked the edge of the knife-blade,
I put on
the body-armor of black rubber
the absurd flippers
the grave and awkward mask.
I am having to do this
not like Cousteau with his
assiduous team
aboard the sun-flooded schooner
but here alone.

There is a ladder.
The ladder is always there
hanging innocently
close to the side of the schooner.
We know what it is for,
we who have used it.

Otherwise
it is a piece of maritime floss
some sundry equipment.

I go down.
Rung after rung and still
the oxygen immerses me
the blue light
the clear atoms
of our human air.
I go down.
My flippers cripple me,
I crawl like an insect down the ladder
and there is no one
to tell me when the ocean
will begin.

First the air is blue and then
it is bluer and then green and then
black I am blacking out and yet
my mask is powerful
it pumps my blood with power
the sea is another story
the sea is not a question of power
I have to learn alone
to turn my body without force
in the deep element.

And now: it is easy to forget
what I came for
among so many who have always
lived here
swaying their crenellated fans
between the reefs
and besides
you breathe differently down here.

I came to explore the wreck.
The words are purposes.
The words are maps.
I came to see the damage that was done
and the treasures that prevail.
I stroke the beam of my lamp
slowly along the flank
of something more permanent
than fish or weed

the thing I came for:
the wreck and not the story of the wreck
the thing itself and not the myth
the drowned face always staring
toward the sun
the evidence of damage
worn by salt and sway into this threadbare beauty
the ribs of the disaster
curving their assertion
among the tentative haunters.

This is the place.
And I am here, the mermaid whose dark hair
streams black, the merman in his armored body.
We circle silently
about the wreck
we dive into the hold.
I am she: I am he

whose drowned face sleeps with open eyes
whose breasts still bear the stress
whose silver, copper, vermeil cargo lies
obscurely inside barrels
half-wedged and left to rot
we are the half-destroyed instruments
that once held to a course
the water-eaten log
the fouled compass

We are, I am, you are
by cowardice or courage
the one who find our way
back to this scene
carrying a knife, a camera
a book of myths
in which
our names do not appear.
---------------------------------
There were a ton of symbols in this poem to evaluate. I chose to concentrate on the ladder, simply because the phrase “hanging innocently” struck me as curious. So my interpretation will likely vary from whoever selects the mask, the knife, or the camera as symbols to evaluate...


As noted, Rich stated that this poem “is” an experience rather than about an experience, and I think what fits for me is the idea of searching our memories, our past. And that is a journey that can only be done alone, subjectively. So using the symbolism of the dive, and the shipwreck, it appears to me that she wants to go back and figure out what happened in her life (her journey, or course) that left her damaged in some way.

To do this, she has to dive deep in the water, which is not pretty but black and dark, symbolizing that the journey is fearful. Rather than jump right into the water as some divers do, she has to use the ladder to slowly descend into the water, indicating hesitancy. Also, the ladder hanging off the boat requires her to face the boat as she went down. This means she literally can’t see what she is getting into: “there is no one to tell me when the ocean will begin.” So as she retreats into her memories, she’s not exactly sure at what point she’ll find clues or meaning. She says in verse 41, 42 “I have to learn alone to turn my body without force”…here she has to let go and turn away from the ladder to explore, letting go of the way out.

The ladder is significant as a symbol because it goes both ways: she could easily quit the journey and go back up. Also, because the water creates buoyancy, she really has to hold onto it to “go down”, so it’s not an easy task to go into the unknown (the sea of memories). The water would be pushing her back up, and the ladder would be so easy to just forget it and head back up to the deck. So the difficulty of the journey means that the rewards of such a journey must be greater.

She wants to find the damage but also what is left of value; she sees something in herself flawed but she wants to inherently know she still has value, something lasting. As she looks at the damage, she shows a sense of gentleness by saying “I stroke the beam of my lamp slowly”. She wants to know “the thing itself and not the myth”, which I take to mean she wants to find the root of her problem rather than the possibly nicer/easier story that she’s told herself (or possibly the excuses she’s made for herself).

It seems that as she explores the wreck, she finds the damage nearest the deepest part of the ship (herself) where her figurative heart is (because “the ribs of the disaster curving their assertion” are what protect the heart from damage). The mermaid and the merman she meets could represent parental figures, her origin of life, but I can’t figure out much on that, except that I think it is her parents as she says “I am she: I am he”, which a biological child could actually be, parts of both.

The reference to the journey of memories and damage could also be seen in lines 80-86: valuable things are still part of her “silver, copper, vermeil cargo lies obscurely inside” so maybe she’s trying to retrieve part of her value. As the half-destroyed instruments, the log and the compass that she mention both connotate the wreck itself: the water-eaten log sinks (the ship), the fouled compass gives poor navigation (the journey).

But in the last few verses, as she finds her way back (we, I, you), I’m lost as to what she’s achieved in her journey. What was the knife there to cut? What would the camera record? And what is with the book of myths?
-----AH